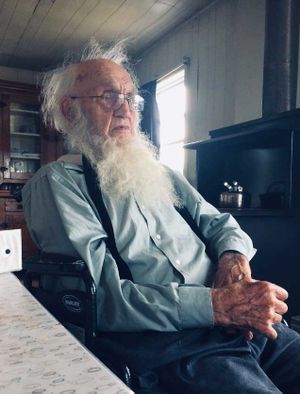 Soon after his marriage, David was called away to serve in a Civilian Public Service camp as a conscientious objector during World War II. He left his young wife behind and served at Sideling Hill in Pennsylvania, later transferring to a farm in Boonesboro, Maryland. In February 1946, soon after the war had ended, he returned to his family in Daviess County, Indiana. In February 1950, he moved his family to the fledgling Amish settlement in Piketon, Ohio. The Piketon community disbanded after only a few years. In 1953, David moved his family to the new settlement he helped found in Aylmer, Ontario, Canada.

David was a prolific writer for most of his life. He was one of the founders of Pathway Publishers in Aylmer in 1964; Pathway became a major publisher for Amish and Old Order Mennonite homes. David was a scribe for The Budget from his teenage years until his death. In 1968, he helped launch Pathway’s Amish monthly magazine, Family Life, which soon reached 30,000 subscribers. David served as editor of Family Life until he moved to Bloomfield, Iowa, with his family in 1976. From there, he contributed as a staff writer for many years. He was widely known, well respected, and widely read in the Amish world.

David published a number of books in his lifetime. In 1966, he launched his first effort, The Mighty Whirlwind, an account of the devastating Palm Sunday tornadoes that swept through northern Indiana. In the years that followed, he came out with more titles, including Simon and Susie Stories, a collection of fictional tales he wrote for Family Life. Through Deep Waters was the story of how his son, Titus, was paralyzed in a diving accident. Stories Behind the News was a collection of essays he published in Family Life over the years.

At age 79, David launched his last great venture. Plain Interests is a monthly newsletter for the Amish, by the Amish, about Amish interests. It was very successful. In the last years of his life, David wrote his memoirs in a set of four small volumes. My First Twenty Years, My Stretch in the Service, Our Years in Canada, and Stories Worth Remembering. These books were self-published from about 2014 to 2017.

In 2008, David and his wife moved to May’s Lick, Kentucky, with their oldest son and his wife, Joseph and Iva Mae Wagler and their family. From there, they traveled to Pine Craft, Florida, for the winters, something that was not allowed when they lived in Bloomfield. Ida Mae gradually succumbed to Alzheimer’s disease, and she passed away in Aylmer, Ontario, in April, 2014, and was buried there. David silently pined for his wife, and his health slowly deteriorated in the summer of 2018. He passed away the day after Christmas of that year and was buried beside his wife in the Aylmer Amish cemetery.

Wagler, David and Roman A. Raber. The story of the Amish in Civilian Public Service : with directory containing names and essential information concerning all Amish men inducted into the Civilian Public Service program up to January 1, 1945. Boonsboro, Md.: C.P.S. Camp No. 24, Unit III, 1945. Reprinted in 1986 at Millersburg, Ohio by John D. Hershberger.

_____. My stretch in the service (Civilian Public Service) and the next seven years: "sunrise to eventide": the second of a series. Aylmer, Ontario: Wagler Books, 2014.