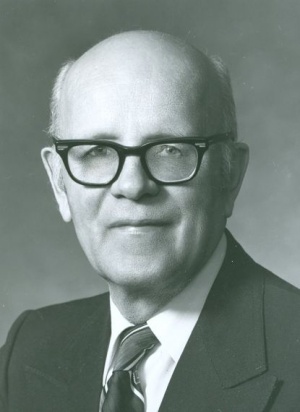 Henry H. Voth: minister and Bible college professor; born 15 September 1918 to Herman and Maria (Retzlaff) Voth in Kalontarovka, South Russia. He was the eighth of 10 children. In 1923, his family immigrated to North America, settling in Manitoba, Canada. On 11 April 1943 he married Erica Schroeder (11 January 1921, Rosenthal, Chortitza, South Russia - 15 March 2008, Winnipeg, Manitoba, Canada), daughter of Johann P. and Anna (Thiessen) Schroeder, in Winnipeg, Manitoba. The Voths had four daughters, all of whom survived childhood. Henry died suddenly on 21 March 1981 following a heart attack. The funeral was held on 25 March in Winnipeg.

In December 1923, Henry immigrated to North America with his parents and siblings. He spent most of his childhood in Manitoba, living mainly in Gnadenthal and Manitou. Following his graduation from high school, he worked for a short time in his brother’s business. After being drafted by the army in 1942, he performed alternative service in Clear Lake, Manitoba, before enlisting in a non-combatant role in the Medical Corps.

Voth worked from 1951 until 1955 as the principal at the Sharon Mennonite Collegiate in Yarrow, British Columbia, and was ordained at the Yarrow Mennonite Brethren Church during this time. For some of these years he served as editor of Konferenz-Jugendblatt der Mennoniten Brüdergemeinden in Kanada. Deciding to pursue Bible teaching further, Henry returned to his studies in Kitchener and Toronto, Ontario, graduating with a Bachelor of Divinity from the Toronto Federated Theological College in 1957. During that time, he helped establish the Toronto Mennonite Brethren Church.

Meanwhile, Henry served as secretary of the Canadian Conference Sunday School Committee during his years at MBBC, secretary of the General Conference of Mennonite Brethren Churches from 1966 until 1972, and assistant moderator of the Canadian Conference of Mennonite Churches from 1967 to 1971. In 1975, he took three months off from his work at the church to teach at the Instituto Biblico Asuncion in Paraguay, and in 1978, he was appointed to a study commission monitoring the restructuring of the General Conference of Mennonite Brethren Churches. The next year, he became the Canadian Conference representative for the Mennonite Central Committee (Canada) Peace and Social Concerns Committee. In 1978, he began studies towards a Doctor of Ministry at Fuller Theological Seminary but was unable to complete his studies. He died suddenly of a heart attack on 21 March 1981 in Winnipeg. The funeral was held on 25 March at the Portage Avenue Mennonite Brethren Church.

Henry H. Voth was a dedicated Bible teacher and pastor whose life and career had a profound impact on the people around him. Wherever he worked or volunteered, he gave an example of commitment for others to follow.