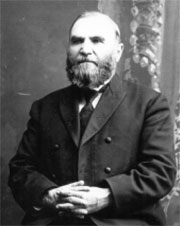 Heinrich taught in the Mennonite village school at Klippenfeld for two years. During this time Voth was converted and had a deep religious experience, and a remarkable revival also occurred in his school. In July 1876 Heinrich and his young family, along with his parents, immigrated to America, establishing a home on a farm near Bingham Lake, Minnesota. In June 1877 he joined the Mennonite Brethren (MB) Church and immediately became an active member. At first he led the Sunday school, then he was elected to the ministry and in 1885 was ordained elder. He served as minister and pastor of the Bingham Lake (Carson) MB Church about 40 years. During this time the congregation grew into one of the largest and most influential of the MB Church.

Elder Voth was active in the Mennonite Brethren Conference in many ways, attending every general conference from its beginning until his death. He traveled much as an evangelist and as itinerating preacher, holding meetings in all the MB churches throughout the United States and Canada. He had a thorough knowledge of the Scriptures and gave valuable Bible addresses. He served the MB General Conference on various committees; he was chairman of the Board of Foreign Missions in 1909-1918. He served as moderator of the General Conference 14 years and as moderator of the Central District Conference 15 years. His oldest son, Henry S. Voth, became a noted evangelist and pastor of the MB Church and a leading man in its conference activities, and his son John H. Voth served as an MB missionary to India for 34 years. During World War I Elder Voth's nonresistant convictions motivated him to move to Manitoba, and in March 1918, the Voths moved to Braeside near Vanderhoof, BC, where he founded the first Mennonite Brethren church in British Columbia.