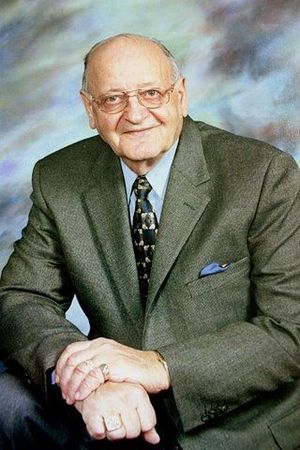 Originally farmers by trade, the Voth family immigrated from Russkoje, Terek, South Russia to Canada in 1924 and settled in Plum Coulee, Manitoba, where Ben was born in 1926. They moved from Plum Coulee to Manitou, Manitoba to continue farming in 1932. In 1935, his father and brother founded a hardware and farm machinery business, where Ben learned to work. His family moved to Chilliwack, British Columbia (BC) in 1945. Once settled, Ben built a successful career as both a general contractor and real estate developer. Ben’s community principles also compelled him to act as a champion for the local credit union movement in the Fraser Valley – a cause to which he would contribute throughout his adulthood.

Ben’s involvement with the credit union system began in 1954, when he became one of the founding 22 members of East Chilliwack Credit Union. At that time Ben also embarked on what would become a 42-year tenure on the credit union’s board of directors, where he served as board chair for 38 years. Through a succession of mergers, East Chilliwack Credit Union became First Heritage Savings in 1983, and later Envision Credit Union in 2001. After nearly four decades of service to an institution that grew to become BC’s third largest credit union, Ben was appointed chairman emeritus upon his retirement in 1996.

Ben’s notable credit union contributions went beyond service to a single institution. Between 1978 and 1990 he served on a number of boards and committees including the Credit Union Reserve Board and the Financial Services Industry Sectorial Committee on the Canada/U.S. Free Trade Negotiations. In 1990, Ben was part of the BC delegation at the World Economic Forum in Switzerland, where he shared his insights about the credit union system. In 1994, Ben received the Distinguished Service Award from the Credit Union Foundation of BC in recognition of his immense contributions to the credit union system.

During his life, Ben was an active member of the Fraser Valley community. Ben served as chairman for a nonprofit housing society, as well as board member for British Columbia’s Stillwood Camp. According to Ben, one of his most memorable personal endeavours was his involvement with the Jesus Film projects in Costa Rica and Mexico.

Ben took his Christian faith seriously, and was an active member of Broadway Mennonite Brethren Church in Chilliwack. He was involved in the construction of the congregation's first sanctuary and served as contractor for the current sanctuary, completed in 1969. He also served as moderator of the church. Ben enjoyed watching hockey, playing golf, traveling, camping and fine dining. Ben often spent free time in his workshop, constructing things like an articulating-arm light for family quilting projects and a waffle-baking apparatus hailed by friends as "nothing short of a genius invention."

Throughout his accomplished life, Ben never lost sight of his involvement with the Fraser Valley community, best exemplified by his choice to live on the same Chilliwack property from 1947 to 1987 and spending the next 23 years in Abbotsford.