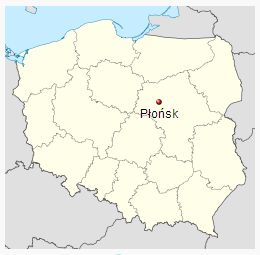 Vola-Vodzinska Mennonite Church, located near Płońsk, northwest of Warsaw, Poland, was a sub­sidiary of the Deutsch-Kazun Mennonite Church. The Namens-Verzeichnis of Prussian Mennonites mentions this congregation for the first time in 1843 (p. 34), when the following ministers were listed: Franz Ewert (1818), Benjamin Foth (1837), Jacob Köthler (1842), and Heinrich Kliewer (1842). Heinrich Kerber and Heinrich Kliewer, both elect­ed in 1842, were deacons. The fact that 1842 is given four times as the year of the election of the church officials could indicate that this was the year of the organization of the church.

In 1857, in addition to Jacob Köthler and Hein­rich Kliewer, Peter Froms was listed as minister. The deacons were the same. In 1881 Cornelius Balzer, Julius Balzer, and Peter Pauls are listed as min­isters, all elected in 1880. Heinrich Bartel served as deacon. At this time the congregation, although still a subsidiary of Deutsch-Kazun, had its own meetinghouse at Vola-Vodzinska. Together the con­gregations had a membership of 597. Kupsch re­ports that many of the Mennonites of this group joined the Baptists around 1860. Many others no doubt joined the immigration to the United States around 1874. By the outbreak of World War I there were only eight families or 35 persons left at Vola-Vodzinska.

Kupsch has given an account of a revival among the Mennonites of this area in the villages of Adamov, Kicin, and Vola-Vodzinska. Above all, Peter Ewert and Johann Penner were instrumental in promoting the revival and introducing baptism by immersion, which ultimately took a large part of the congregation to the Baptist Church. In 1858 Johann Penner, of Adamov, on a visit to his relatives at Vola-Vodzinska, testified for his re­newed faith and was imprisoned for ten days. A re­vival occurred. The first baptism by immersion took place at Kicin on 25 August 1860. Soon there was disunity between the Baptists of Mennonite back­ground and those of Lutheran tradition. The Baptists did not share the Mennonite principle of nonresistance and the practice of footwashing. For a while Penner and Ewert separated from the Bap­tists. However, "Ewert recognized his error, repent­ed, and came back to the Baptists, and became a missionary. Penner also returned to the Baptists in 1863."

In 1862 the Baptists in Vola-Vodzinska had a fol­lowing of about 20 among the Mennonites. The Baptist missionary Alf was quite active among them. He and Ewert also corresponded with the Mennonite Brethren of the Ukraine. The Mennon­ites of Poland who were revived and testified for their new Baptist faith shared in the persecution that came over this new movement. They were pioneers of the revival that spread through Poland and gave rise to the Baptist movement and at the same time they speeded up the disintegration of small struggling Mennonite groups and churches.