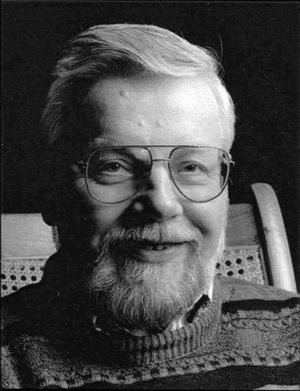 Gerrit “Gerry” Jan Vandeworp was an outsider who became known and loved among Mennonites as a pastor and within the community as an advocate and friend of poor and marginalized people. Gerry, one of eight children, was born on 15 May 1936 to Evert (20 December 1908–12 May 1959) and Antje (Roessink) Vandeworp (25 February 1915–10 July 1995) in Heino, Overijsel, The Netherlands. He came to Canada with his Dutch Reformed immigrant family on the Vollendam in April 1951, settling in Exeter, Ontario. He married Sandra Finkbeiner of Exeter, daughter of Alvin (1909-1967) and Marguerite Amy Finkbeiner (1916-2009) on 12 July 1963. They had a son, two daughters (one died in infancy) and four grandchildren. Gerry Vandeworp died at Queensway Nursing Home on 17 April 2014 in Hensall, Ontario. His funeral was held on 22 April 2014 at the Haskett Funeral Home in Exeter. He is buried in the Crediton Cemetery in southern Huron County, Ontario.

In The Netherlands as was the custom in his church, Gerry was baptized as an infant. After studying New Testament Scriptures as an older teenager, Gerry chose to be re-baptized, a dramatic experience which he said had a great impact on his spiritual journey and truly made him an “Anabaptist.”

Gerry sensed a call to ministry and after coming to Canada studied at Briercrest Bible Institute in Caronport, Saskatchewan, graduating in April 1961. For two summers he helped at a rescue mission in London, Ontario and then at Daily Vacation Bible School at Exeter Mennonite Church where Stan Sauder was pastor. Stan was also a member of the Kitchener House of Friendship board, and suggested that the board consider Gerry for the position. Despite having limited education and no social work training or experience, Gerry received a call from Bishop C.F. Derstine of First Mennonite, chair of the House of Friendship Board, who interviewed and hired him on the same day. “It happened so fast I didn't have time to think,” said Gerry. He moved from Exeter and began as executive director on 1 October 1961, keeping the job until 1978. The Mennonite Conference of Ontario recognized his work at House of Friendship as ministry and ordained him at First Mennonite Church on 2 December 1973.

Within the first decade as executive director of House of Friendship, Gerry moved the agency, which was strongly supported by Mennonites but also other denominations and city officials, from a mission of primarily evangelizing alcoholic vagrants who came to the hostel for food and a bed, to a broader social vision. He worked hard at advocating for the poor and building relationships, winning respect and trust from clients, neighbors, staff and a growing support base. Under his leadership, House of Friendship added several buildings to accommodate its expanding services, including delivery of food hampers to hungry families. The budget multiplied by more than 100 percent. No doubt his greatest achievement at House of Friendship was launching a recovery home for alcoholic men and a three-quarter house for its graduates to prepare them to re-enter the community.

While in Kitchener, Gerry also was a Federated Appeal Board member, served on the Social Planning Council, the Kitchener-Waterloo Council of Churches, Regional Development Council, Alcohol Recovery Homes Association of Ontario (president in 1977) and the Rotary Club.

After 17 years as executive director of House of Friendship, Gerry recognized the need for a new direction and new leadership. Having laid aside his sense of call to pastoral ministry for two decades, he picked up that mantel, serving as pastor at Bethel Mennonite Church, Elora, Ontario (1978–1983) and Stoner Heights Mennonite Church, Louisville, Ohio (1985–2000). He returned to Ontario where he served interim pastorates in London, Nairn and Preston (2000–2002) before retiring to Exeter, Ontario.

Alongside pastoral ministry, Gerry conducted worship services in nursing homes, served on the Northern District Mennonite Ministerial, the Inter-Mennonite Board of Congregational Resources, Project Teach and as a camp ambassador, all in Ontario. In the Ohio Mennonite Conference, he served as an overseer, on the Leadership Commission and as the first Mennonite/Brethren fund raiser for Habitat for Humanity in Canton, Ohio.

Another of Gerry's remarkable gifts to the community was donating more than 50 pints of blood through the Red Cross over many years, a direct response to seeing his two-year-old brother die of leukemia. This quiet, unrecognized action was a contrast to his very public work on many fronts, far beyond anything he imagined as a 20-something Vacation Bible School helper, a legacy which continues to live on.