From GAMEO
Revision as of 16:29, 17 November 2016 by RichardThiessen (talk | contribs) (Text replace - "near-by" to "nearby")
(diff) ← Older revision | Latest revision (diff) | Newer revision → (diff)
Jump to navigation Jump to search
A checked version of this page, approved on 17 November 2016, was based on this revision. 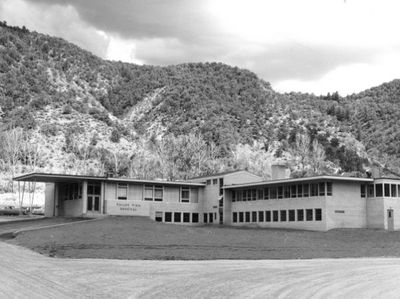 During the mid-1950s the Mennonite Board of Missions and Charities was asked to operate a new hospital under construction on 4.5 acres of Garfield County-donated land. The site was formerly part of the county poor farm, just southwest of the existing boundaries of Glenwood Springs, a small town on the west slope of the Colorado Rocky Mountains. Construction of the city-built and owned Valley View Hospital began on 4 July 1954, and the facility with some 30-plus beds was dedicated on 14 August 1955. In April 1956 the former Garfield County Hospital located nearby was leased to the Mennonite Board of Missions and Charities to be operated as the Mountain View Nursing Home. Samuel Janzen, who had previously served for five years as Mennonite administrator of the Kiowa County Memorial Hospital at Greensburg, Kansas, became the administrator and executive director of the new hospital and nursing home and Orpha Zimmerman was named Director of Nursing.

Janzen and his family moved to Glenwood Springs in June 1955, several months before the opening of the hospital, to work with the hospital board and help plan staffing for and furnishing of the new facility. He brought several key Mennonite personnel with him and complemented these people by hiring local residents. The original Mennonite board consisted of Janzen along with Eli Welmvin, Henry T. Oliver, and H. Ernest Bennett. A Voluntary Service (VS) unit was established at Glenwood Springs, and some 70 Mennonites served at the hospital and nursing home as VS workers between 1955 and 1965. The workers lived in a dormitory-style house that was built for them near the hospital – the men upstairs, the women downstairs.

The date of the hospital’s dedication was also the date of Glenwood Springs' first formal Mennonite Sunday morning worship service which met in the basement of the John and Grace Hershberger residence with 65 persons in attendance. The group was formally organized as the Glenwood Mennonite Church on 18 March 1956 with 18 charter members, and Janzen served as its first pastor. Construction of a church building began in April 1957 under the direction of the VS unit, and the completed structure was dedicated on 27 July 1958.

In 1961 the first of several hospital expansions was completed, including an outpatient wing, emergency room, and enlarged laboratory. In 1965, after ten years of Mennonite administration, Janzen reported that gross volume of hospital services during the decade had been $2,450,387, a statistic that included treatment of 14,234 inpatients and 39,097 outpatients, and the birth of 2,117 babies.

In 1967 Janzen resigned as administrator of the hospital and nursing home to take a pastorate in Harrisonburg, Virginia. Leo Swartzendruber, who began his career with Valley View in 1958 and had earlier moved from bookkeeper to office manager, succeeded Janzen. During his five-year tenure as administrator, a three-bed intensive care/coronary care unit was developed.  Al Herron took over as the new administrator in 1972, and served until 1974 when he was replaced by Elbert Detweiler.

In 1977 Mennonite administration of Valley View Hospital ended. The 50th anniversary of Valley View Hospital was marked by a succession of important, historic, and celebratory events. The opening ceremonies for a new modern hospital facility in Glenwood Springs coincided closely with the return of Janzen and some of Valley View’s other original Mennonite staff members for a reunion and sessions of the Rocky Mountain Mennonite Conference in September 2005.

Valley View Hospital, Glenwood Springs, Colorado, ad­ministered by the Mennonite Board of Missions and Charities (Mennonite Church), was dedicated in 1955. It was a $500,000, 36-bed hospital, with 10 bassinets, serving a large mountain region on the western slope of the Colorado Rocky Mountains, including rural ranch­ing areas as well as a number of small towns. During the 1957-1958 fiscal year the hospital had a total of 1,681 inpatients and 2,908 outpatients, with a daily inpatient average of 23 adults. A voluntary service unit served in the hospital as well as in the nearby Mountain View Nursing Home. A Mennonite (Mennonite Church) congregation was organized in Glenwood Springs in 1956, and its meetinghouse was dedicated in July 1958. Samuel Janzen was ad­ministrator of the hospital and Orpha Zimmerman director of nursing service in 1959. The hospital was built and owned by the city.