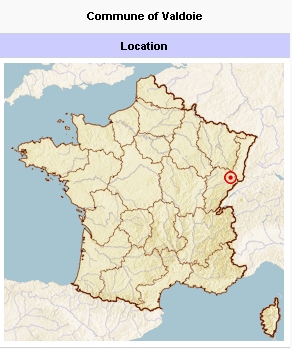 The Valdoie center, a 10.4-acre property overlook­ing the north end of Valdoie, was acquired in 1950 by the Association Fraternelle Mennonite (AFM), with the help of a loan from the Mennonite Central Committee (MCC), for 4,250,000 French francs (approxi­mately $12,150) plus a 25 per cent sales tax. The postwar MCC children's home at Nancy ("Chalet aux Fleurs") was transferred to the large house on the Valdoie site (the "Villa des Sapins") in the same year. The Villa also became the headquarters of the MCC in France.

In 1950-1959 the Villa served as a home for under­privileged children under the direction of Mary Ellen Shoup of the MCC and with the support of both French and American Mennonites. About 35 children between the ages of four and twenty-three could be kept in the home at one time; they were kept for an indefinite period of time until a home in a family could be found for them or until they were old enough to find work. During this eight-year period more than 100 children found a home in the Villa. Contacts have been maintained with most of these through regular visits and a small bi­monthly paper, and many of these return to the Villa occasionally for vacations. Since its purchase, the Villa has been used for many meetings of French Mennonite ministers, church workers, and young people.

A second large building on the site, which was remodeled for use as a center for youth camps and other meetings, and has served as headquarters for the Association Fraternelle Mennonite, was transferred from John Howard Yoder, the MCC director in France at that time, to a French Mennonite leader. This second building has been the normal meeting place for the spring sessions of the Conference of French-speaking Mennonites, and on one recent occasion it was used for a regular session of the Conference of the Mennonites of Alsace.

In 1953, a third and smaller building on the site was opened as a home for the aged. This home, with rooms for about twenty elderly people, has al­ways been operated by the Association Fraternelle Mennonite.

The responsibility for the management of the children's home was transferred from the MCC to the AFM on 1 January 1959. At present, Ernest Hege is executive secretary of the Association Fraternelle Mennonite and direc­tor of the home for the aged. In 1959, Mme. Christiane Gaudry was the directress of the children's home.