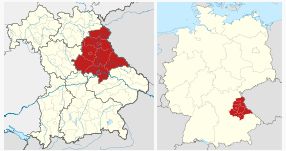 Upper Palatinate (Oberpfalz) was one of eight districts of the former kingdom of East Bavaria, Germany, and included the river territory of the Regen and the Naab, parts of the Franconian Jura, the several districts south of the Danube near Regensburg. It is now one of the seven administrative regions of Bavaria (Bayern), Germany, located in the east of Bavaria. The area of the Upper Palatinate is 9,692.23 square kilometres, and its population in 2005 was 1,089,543 (in 1950, 896,520). It is a hilly region, containing the Bohemian Forest and the Fichtelgebirge. Regensburg, its capital, is a historic city and is today an important communication center. With the exception of the section south of the Danube the land of the Upper Palatinate is not very fertile.

For the history of Mennonitism the Upper Palatinate never reached the significance of the Palatinate proper. To be sure, there was in Regensburg an Anabaptist congregation as early as 1527, which reached its peak in 1539. Hermann Nestler gives the number of members as several hundred. But during the period of persecution it disappeared. Not until 260 years later, when the Wittelsbachs inherited the Bavarian lands at the turn of the 18th century, and Maximilian Josef, who knew the Mennonites to be competent farmers, called them into the country, was another congregation organized. Some from the region of Zweibrücken and Lorraine settled in the Upper Palatinate, chiefly as renters of the estates of noble landowners. The congregation, belonging to the Amish wing, called its preachers and elders from its own ranks and held its meetings in rotation in the homes of the widely scattered members. About 1890 a minister was employed by the congregation. Since that time the meetings have been held in the Lutheran Bruderhauskirche in Regensburg. They were joined in the course of time by brethren coming from Baden, Württemberg, and the Rheinpfalz. Census figures state the Mennonite population of the Upper Palatinate as 128 in 1875, 178 in 1885, 134 in 1900, and 95 in 1910.