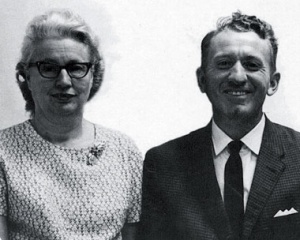 Robert and Myrtle Unruh both grew up on farms. After finishing their basic education, both Robert and Myrtle studied at Bethel College in North Newton, Kansas, where Robert received a degree in science and Myrtle in home economics. In his youth, Robert developed an interest in pursuing work in agriculture. He and Myrtle applied for service with the Mennonite Central Committee (MCC) and were accepted for a placement in the Chaco, Paraguay. From 1951 to 1983, Robert worked as the head of an agricultural experimental station located near Filadelfia in the Fernheim Colony but sponsored by three Mennonite colonies in the area.

One of Robert’s major accomplishments during this time was the introduction of buffel grass (panicum antidotal), a hardy grazing variety from Africa. After receiving the new seeds from the Mennonite Central Committee, he worked for two years to produce enough for large-scale agriculture. At the same time, the experimental farm also introduced new strains of peanuts, beans, fruit trees, ornamental shrubs, and other plants. Robert worked with research institutes from around to world to develop new varieties of plants that could withstand the dry conditions of the Chaco.

While her husband worked to improve agriculture, Myrtle taught English, cooking, and food preservation. She began with an English language class of 12 people and then expanded her work to include helping the local women learn to dry fruits such as bananas, papayas, and mangoes, as well as pickling foods such as cabbage. She taught the local women about nutrition and home economics while also encouraging family education. Myrtle also wrote a cookbook called Mit Manna Gespeist, which sold out in a year and went through several reprintings. She also wrote a book of housekeeping advice called Ratschläge für Haushalt: die Sendungen des Servicio Agropecuario.

In 1983, Robert and Myrtle Unruh’s term in Paraguay ended because of health problems that Myrtle was experiencing. She died in 1996 in Newton, Kansas. The next year, Robert attended the Neuland Colony’s 50th anniversary celebrations, where he received an award for the work he and Myrtle had done. The celebrations also included planting a tree in Myrtle’s honor, just outside the room of the school where she had taught. After the celebrations, Robert returned home to Newton, Kansas, where he died in 1998.

Robert and Myrtle Unruh were dedicated mission workers whose efforts in the Paraguayan Chaco had a profound effect on the people they encountered. Through their efforts, they were examples of faith and persistence for future generations to follow.