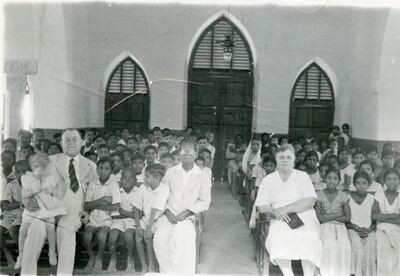 Cornelius Heinrich Unruh: missionary and preacher; born 8 April 1873 in Temir-Bulat (German, Philippstal), Crimea, to Heinrich B. Unruh (24 May 1847, Waldheim, Molotschna, South Russia – 17 October 1883, Timir-Bulat, Crimea, South Russia) and Elisabeth (Wall) Unruh (24 May 1846, Schoensee, Molotschna, South Russia – November 1922, Tiege, Molotschna, South Russia). He was the fourth of 10 children. In July 1903 in Hamburg, Germany, he married Martha Woltmann (27 March 1879, Germany – 14 November 1956, Rochester, New York.) The couple had 7 children, 5 of whom died as babies in India and 2 sons that survived to adulthood. They also became the guardians of their niece, Elizabeth Unruh (1912-1997) in 1924, sometimes referred to as their daughter. Cornelius H. Unruh died 9 December 1941 in Kitchener, Ontario, after experiencing a severe stroke.

Cornelius Unruh lost his father when he was 10 years old and continued to live with his mother helping her on the farm until he was required to leave for the compulsory state service in the Forestei. He was converted at age 16 and was baptized in Spat, Crimea. Sometime during his three years in the Forestei, missionary Abraham Friesen from India visited his camp. Cornelius too wanted to spend his life in the Lord’s work, and Friesen made a deep impression on him. Through the help of his uncle Peter Unruh, he was introduced to Peter Schmidt of the Steinbach estate. Schmidt was ready and willing to support Cornelius with theological training at the Baptist Seminary in Hamburg, Germany. Cornelius studied at the Baptist Seminary from 1899-1903. This is where he met Martha Woltman who was taking nurses training.

After completing the seminary training and marrying, Cornelius and Martha Unruh went to Russia where they were ordained in August 1903 in Rueckenau, and began a year of travelling in Russia gaining support for their call to service as Mennonite Brethren missionaries in India, where his older brother Heinrich H. Unruh and his wife Anna had been serving since 1899. They worked closely with the American Baptist Missionary Union.

In November 1904 Cornelius and Martha Unruh and their new-born son, born 2 November 1904 in Germany, sailed from Bremerhaven, Germany for India. Also sailing with them were Johann G. Wiens and his wife, and Anna Epp from Rosenort. After a year of learning the Telegu language for Cornelius, and learning both Telegu and English, for Martha (Cornelius had studied some English during his Hamburg days), they were sent to Mahbubnagar in the Deccan, Hyderabad state, to replace some American Baptist missionaries going on furlough. There was a boarding school, a small hospital and a big field for evangelistic work with many villages. After two years in Mahbubnaga, the missionaries returned and the Unruhs were sent to Nalgonda, where Abram Friesen and his wife had served, and were leaving on furlough due to Mrs. Friesen’s health. Cornelius and Martha Unruh worked in Nalgonda from 1908 to 1939 and had only 3 furloughs during their 35 years in India. The first furlough, 1912-1915, lasted a bit longer because their return was delayed due to the outbreak of the First World War. During their second furlough, 1923-1925, they became Canadian citizens, before returning to India in January 1925. During their third furlough, 1933-1934, in addition to attending their son’s graduation from Acadia University in Nova Scotia, Cornelius was given an honorary Doctor of Divinity (D.D.) from Acadia University. 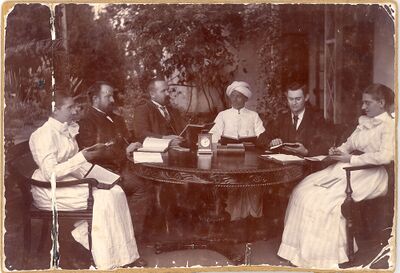 The work at the Nalgonda mission station had a heavy emphasis on evangelism as Cornelius would spend several months each year travelling and preaching in the villages. The station also housed a school that trained many boys and girls, who became teachers, preachers and nurses and continued the Christian work in India. During the famine, 1917-1920, the Unruhs added relief work to their activities. Many people came to accept the Christian faith and came to request baptism. In one year Cornelius Unruh had over 1000 people come to be baptized. Despite exhaustion, he continued to preach and teach. Even as they were returning to America after their final farewells from India, the captain of the ship asked him if he would conduct services on the ship. The staff had been on board the ship 8 Sundays from Los Angeles to Bombay, and not had one service, because there was no minister on the boat. Despite his exhaustion, he willingly accepted the request and held services on deck on Sundays on the ship.

From 1939 to 1941, Cornelius and Martha Unruh lived in Kitchener, Ontario, supported by a pension from the American Baptist Missionary Union. Cornelius continued to be invited to preach in Mennonite and other churches. He became a dear senior mentor to Henry H. Janzen, pastor of the Kitchener Mennonite Brethren Church, who also relied on him to fill in for him when he needed to travel on conference and mission-related work.

When Cornelius H. Unruh died rather unexpectedly in December 1941, Henry H. Janzen spoke at a German service held at the funeral home, and Dr. McLaurin, Mission-Secretary of the Ontario Baptist Union conducted the funeral at Baptist Church in Kitchener. It was said that wherever he spoke people were drawn to him. He truly was a gifted preacher and teacher.