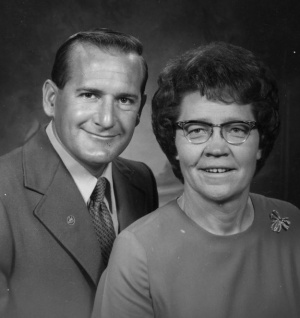 At age 12 Eleanor accepted Christ as her Savior. In July 1940 she was baptized in the Main Center Mennonite Brethren Church. Her parents nurtured in her a love for mission work, a desire which was reinforced by her four years of studies at Prairie Bible Institute. In fulfillment of this calling, Eleanor served as a teacher with Sudan Interior Missions in Ethiopia for twenty-six years.

Eleanor’s first assignment was in Goba, a part of Ethiopia that was predominantly Moslem. Reflecting on this time in her life, she wrote: "My life objective is to be an empty vessel which can be used of the Lord to the salvation of many." The many students who became Christians under her influence later formed the nucleus of the first Christian church in the area.

As a consequence of living in the high altitude of Goba, Eleanor suffered heart sickness. She was therefore transferred to administer a junior secondary boarding school in Soddo, a region in southern Ethiopia with some 600 churches. Here church members were concerned to have all of their children receive a basic elementary education. Eleanor took on added responsibility to train Ethiopian teachers for the task, eventually endeavoring to offer primary education to the 10,000 children in this area. Often she would use her summer vacation time to train local staff for this task, and in securing necessary teaching supplies.

Further to her regular duties, she was asked to accept responsibility for education of blind children, requiring her to master Amharic Braille. To assist in teaching the Christian faith to these children, she began to produce parts of the New Testament in Braille.

After she had taught for five years in very primitive conditions, the Christofel Mission for the Blind from Germany donated enough money to construct a substantial school. Her future husband was appointed as the builder of this project.

About one month after Eleanor's marriage to George Tweedale in February 1971, she accidentally became connected to 220 volt electricity for several minutes while living in a primitive mission house at Soddo, Ethiopia. After this the Tweedales had to take medical leave in Canada. This near electrocution left Eleanor in pain for the rest of her life, and complete memory loss for nearly six months. However, before the end of that year, Eleanor recovered enough to be able to continue serving the needs of sightless people in Soddo with her husband. Although Eleanor was severely handicapped by the effects of her accident, with the help of her husband she was able to build and establish a sizeable school, which accommodated 125 orphaned blind students. Most of their students became Christians, and a number of them became pastors of churches and evangelists throughout the region.

The Tweedales continued their ministry at Soddo in dangerous and very difficult circumstances for two years after the start of the Communist Revolution in Ethiopia until late 1976 when they were forced to leave Ethiopia. However, before their departure they were able to complete the production and distribution of the Amharic Braille New Testament.

Since missionary work was no longer possible in Ethiopia, the Tweedales returned to Canada and attended the Central Heights Mennonite Brethren Church in Abbotsford, British Columbia, where Eleanor became a member in March 1968. The Tweedales continued their support of missions and missionaries by their participation on the church missionary committee.

On 9 October 1984 Eleanor was admitted to the MSA Hospital in Abbotsford, diagnosed with acute leukaemia. She died 16 days later. Medical specialists said that this disease was caused by her electrical accident, and although it began mildly from that time, it became acute in the last year of her life.