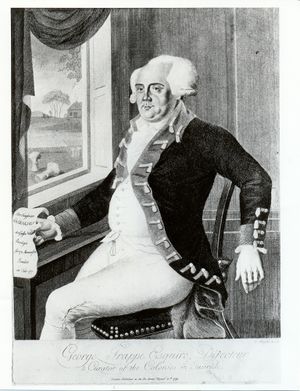 George von Trappe, a Russian government official who under Potemkin and Catherine II of Russia was charged with the responsibility of inviting German settlers to the Ukraine. He was particularly assigned the task of winning and helping the Mennonites of Danzig along these lines and became the director of the Mennonite settlement program. In August 1786 he contacted Peter Epp, elder of the Danzig Mennonite Church, who was very much interested in the invitation. Trappe prepared a leaflet for distribution among the Mennonites of the Danzig Mennonite Church. He was very successful in influencing prospective settlers and made arrangements for a delegation to inspect the Ukraine.

Trappe was interested in the religious unity of the settlers as a prerequisite for the success of his work as director of the Mennonite settlements. On his way to England he stopped in the Netherlands in the summer of 1788 where he visited the Mennonites of Amsterdam, Haarlem, and Harlingen, including Heere Oosterbaan, moderator of the Friesland Mennonite Conference (Sociëteit). He presented to them his concern pertaining to the divisions among the Mennonites of Danzig and Prussia into the Flemish and Frisian groups, including the problem of mixed marriages, and found that the Dutch Mennonites had overcome the negative results of this separation. They complied with his request and wrote to their brethren in Danzig, particularly those who were interested in settling in Russia. J. C. Sepp of the Old Flemish Mennonite Church of Amsterdam wrote a letter, dated 15 May 1788, in behalf of the church addressed to the elders and ministers of the Danzig churches. A similar longer letter was written and printed as a result of a conference of Mennonites in Leeuwarden on 31 July 1788, which was entitled Missive van de Sociëteit der Doopsgezinde gemeenten in Vriesland en Groningen . . . . The concern expressed was that there should be no banning of members marrying from the Frisian into the Flemish group or vice versa. It is an interesting note that von Trappe and the Russian government were vitally interested in the unity of the Mennonite settlers, and shows some of the great difficulties which the settlers would encounter. It is not clear what von Trappe's role was when the pioneer settlers of Chortitza later were actually torn by strife and lacked leadership. (See also Russia and Chortitza.)