Tourist establishments for hospitality, entertainment, and education were owned primarily by non-Mennonite entrepreneurs in the early stage of tourism. Since 1970 Mennonites themselves have become increasingly involved in commercial hospitality as owners of motels and restaurants as well as bed-and-breakfast facilities. These commercial enterprises cater to local clientele as well as to tourists. Prior to the 1980s the Amish and Old Order Mennonites remained rather aloof from tourist establishments which were characterized by one Amishman as "leisure-lust playgrounds." Since then some Amish and Old Order Mennonites have become directly involved by opening hundreds of small roadside stands on the edge of their farms and lawns to sell produce and homemade crafts. These small native stands represent a negotiated compromise between the Amish and the tourists. On the one hand they provide tourists with a rare, but controlled, peek into genuine Amish and Old Order Mennonite life and the tourists, in turn, respond by purchasing Amish or Mennonite made products which bolsters their economy especially in areas faced with shrinking farmland. Tourist industries also provide a major source of jobs and income for non-Mennonite and Mennonite people in several local communities. 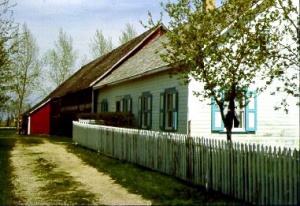 A series of paradoxes thread their way through the phenomenon of tourism. To begin with, the European Anabaptists were violently persecuted and exterminated because they dared to be different. Paradoxically the defiance of modern culture by Old Order groups has brought them not persecution, but admiration and respect. The course of history has converted them from despised heretics into esteemed objects of modern curiosity. Moreover, the world which these Old Order groups have tried so hard to keep at arms length, is now reaching out to them. Oddly enough, the more separate and unique they become the more they entice modern curiosity. Furthermore, the tourists come to see the distinctively dressed Old Order people, not the progressive Mennonites who operate the information centers and serve as tour guides. In fact, if all Mennonites and Amish were as assimilated as those who operate the motels and information centers, tourists would pay scant attention to the Mennonites. The prime objects of tourist interest, the Old Order groups, show little interest in tourism, which they often consider a nuisance.

Among Old Order groups, tourism which appears to threaten solitude and privacy, may in fact bolster cultural identity. An Old Order Amish person noted that, "Today we get loads of praise for our way of life." Another Amish leader said, "We are no longer looked down upon." The fact that tourists from around the world have come to learn of their way of life has brought quiet satisfaction and enhanced Amish collective self-esteem. Tourism with its clicking cameras and staring visitors, like persecution of bygone days, reinforces the cultural boundaries and reminds the Amish that they are indeed different from the rest of the world. Tourism also creates expectations for Old Order behavior since the tourists come to see a horse-and-buggy , people who have turned their backs on electricity. Old Order behavior, thus in part, fulfills the expectations created by the tourist industry. Such external expectations may indeed fortify rather than endanger the Old Order way of life.

Perhaps the greatest irony lies in the new relationship that tourism has created between Amish and Mennonites and their surrounding communities. The larger culture from which the Old Order groups have fervently sought to remain independent, has now come to depend on them financially in order to sustain the tourist industries. The image and identity of Lancaster County, PA, for instance, is highly dependent on the presence of the Amish community. Although they are not assertive politically, their importance for tourism has given the Amish a newfound power and leverage to negotiate with modern officials over issues ranging from schools to zoning laws-all of which are essential to their survival as as people.