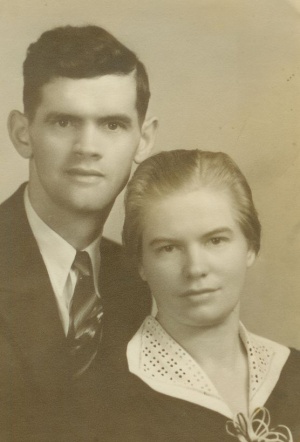 Jacob John "J. J." Toews: minister and teacher; born 30 April 1914 in Alexandertal, Molotschna Mennonite Settlement, South Russia, to Johann A. Toews and Margaretha (Janz) Toews, the fifth of six children. On 3 October 1937, Jacob married Lena Schulz, daughter of David and Agatha (Suderman) Schulz, in Coaldale, Alberta, Canada. The couple had three children, the eldest of whom died shortly before J. J. in 1995 (see additional information for further details regarding J. J.'s family). Toews died in Winnipeg on 6 March 1995, where he was buried.

Jacob and Lena had three children: Melvin, Philip, and Carolyn.