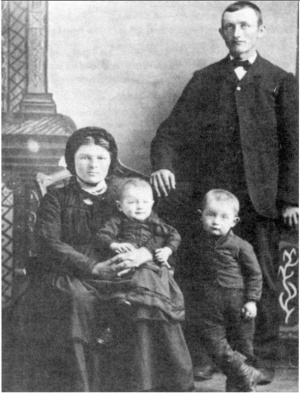 Bernhard Toews: teacher and immigration delegate; born 4 September 1863 in the village of Chortitza, Chortitza Colony, Russia, to Jacob and Anna (Wiebe) Toews as the seventh of eight children.

Bernhard Toews grew up with his family in southern Russia. He gained a good village and secondary school education in Russia. He immigrated to Canada in 1877 with his family and many other Mennonites, where he settled in Reinland, Manitoba. He was baptized on 2 June 1884. In 1885, Bernhard married Katharina J. Funk (1865-1903), daughter of Johann Funk, bishop of the Bergthaler church which had just been established on the West Reserve in 1882. Bernhard and Katharina (Funk) Toews lived in Gnadenthal from 1886 to 1900 and remained members of the Sommerfeld Mennonite Church. They moved to Wiedenfeld in 1900. In 1902, Bernhard’s brother Heinrich Toews, also a school teacher, gained notoriety when he shot three students and three trustees and killed himself a short time later. Bernhard’s wife Katharina died in 1903. In January 1904, Bernhard married Aganetha P. Harder (1876-1927) in Butterfield, Minnesota. They also made their home in Manitoba. They had six children together, one of whom died in childbirth.

With the education he had received in Russia, Bernhard was well qualified to teach in the Mennonite-private village schools in Manitoba. In 1916, however, the Manitoba government abolished private schools in the province. Many teachers and ministers who continued to work in the private, Mennonite-operated schools were prosecuted because of amendments to the Public Schools Act, and Bernhard was imprisoned on 2 January 1920. Later, he became involved in investigating the possibility of immigration to Mexico or South America. In 1921, he traveled to Paraguay to make arrangements for a mass migration of Mennonites out of Canada. Just before he and his family were scheduled to leave, Bernhard became ill. He died on 12 November 1927 in Rochester, Minnesota. His wife died six weeks later.