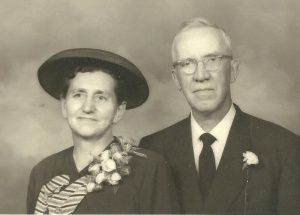 Aron attended elementary school in Alexanderkrone for seven years before graduating from the secondary school in Ohrloff. After two more years of studies in pedagogy, he passed the teacher's examination with distinction. He taught in the village school in Kleefeld, Molotschna for three years.

Aron was saved at the age of 16 and participated in choir and youth work. He was baptized in 1906 and joined the Rückenau Mennonite Brethren Church. That same year he accepted a teaching position in Friedensruh, where he met his future wife, Agnes Harms. After his marriage Aron and his wife moved to Rückenau where he taught for ten years (1908-1918). He was elected to the ministry in 1914. The couple moved back to Friedensruh in 1918 where he taught for four more years until he was dismissed by Soviet authorities. He then became pastor of the Lichtfelde Evangelical Mennonite Brethren (Allianz) congregation.

Aron is probably best known for his two-volume work, Mennonitische Märtyrer. It began as an attempt to collect information on the fate of Mennonite ministers in Russia during the 1920s and 1930s. Public awareness and interest expanded the project, and Toews received numerous submissions from relatives and friends. Unfortunately, the fire that destroyed his home also destroyed much of his research, but he was able to recover from the loss and the work was published in 1948.

In October 1947 Aron and his wife moved to British Columbia where they acquired a small farm in Abbotsford. Aron ministered in the Clearbrook Mennonite Brethren Church and succeeded Jacob J. Doerksen as leading minister of the congregation from 1951 until 1954. He resigned due to poor eyesight.  Aron suffered a severe stroke on 1 March 1963 and lost his eyesight completely.