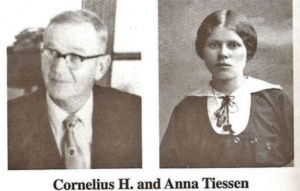 In Russia, he attended elementary school in Steinfeld and high school in Halbstadt. When conscripted he decided to serve in the Red Cross of the Tsarist Army rather than do alternative service in forestry. For his courage and bravery on a medical supply train, the government of the Tsar awarded him two citations, one being the coveted St. George's Cross

In 1918 Cornelius married Anna Neufeld, born in Schönfeld, Ukraine one of four children of Gerhard Neufeld and Helen Schroeder. After completing Teacher's College in Halbstadt, Cornelius obtained a teaching position in Waldheim (1919) which he held until the family left for Canada in 1925. They arrived in Vineland with their two sons, Walter and Helmut. This was followed by a year in Tavistock and then in 1927 the Tiessen family moved to Leamington where he was variously employed in the fruit, vegetable, apiculture and tobacco industries. Two daughters, Irma and Talitha, were born to them in Leamington.

It was during the early years of development of the United Mennonite Church in Leamington that Cornelius Tiessen made his major contribution. As the chairperson at organizational meetings, he guided members towards the formation of an established church. He attended conferences, taught catechism, counseled youth and ministered to the fledgling congregation. As well, he organized a German language library of books, magazines and newspapers. He performed this service with energy, devotion and dedication. Although he had previously declined ordination, on the encouragement of colleagues he consented (1933) and served for six years as an ordained minister.

From  1931 to 1933 he also conducted a private German language school for some 25 pupils whose parents wished their children to understand the language of the church. With his finely-honed sensitivity for German literature, he worked diligently to imbue his students with an appreciation for the German language.

His upbringing and professional training had molded him into a committed teacher. His presentations were forceful and didactic. He particularly enjoyed working with young people of the church, organizing social events in which they participated as actors in plays and in giving recitations.

Following the death of his wife Anna in 1942, Cornelius married Helena Froese and with her attended the Mennonite Brethren Church of Leamington. He and Anna are buried in the Ruthven cemetery at the corner of Highway #3 and the Albuna townline.  In 1972, N. N. Driedger stated that "C. H. Tiessen was the mind and soul of the Mennonite immigrants coming to Essex County" and he will be remembered as the pioneer of the United Mennonite Church of Leamington.