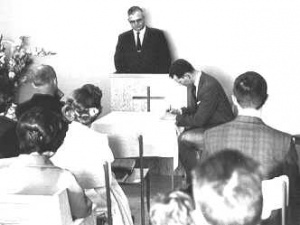 The Thompson United Mennonite Church in Thompson, MB began services in 1961, and formally organized in 1963. The first building was occupied in 1963. John F. Wiebe is considered the founding leader of the group. The congregation originated through colonization of northern Manitoba and outreach by the Conference of Mennonites in Canada.