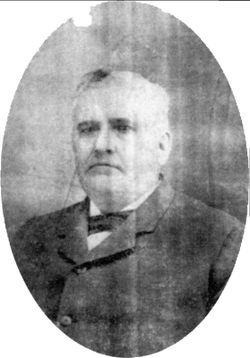 Johann P. Thiessen grew up in the Molotschna Colony, Russia, in a family of ministers; both his father and his maternal grandfather had positions of responsibility in the Mennonite Kleine Gemeinde. In 1871, Johann married Aganetha F. Heidebrecht (1852-1933) of Blumstein, and moved to the Borosenko settlement with Aganetha’s family. They had seven children, one of whom died young. Despite his limited education in both German and Russian, Johann was a successful businessman.

During the emigration from Russia to America, Johann helped the migrants as they sold their land in Russia and was one of three men entrusted with the safekeeping of the group’s money. He also helped the emigrants obtain passports and looked after them on the journey. The group he accompanied arrived in New York on 17 July 1874, and moved west across the continent to Nebraska from there.

Johann P. Thiessen bought a large tract of land to farm. He operated a farm implement business in the town of Fairbury, Nebraska, until the nearby Jansen was established. He became the first postmaster of Jansen and also worked for the Jansen State Bank. He became the Treasurer and Manager of the Farmers’ Co-operative Telephone Company and was the head secretary of the Mutual Protective Association. Later, he and another man from the area also began a lumber business.

From 1907 to 1911, Johann Thiessen served in the Nebraska State Legislature, completing two consecutive terms. During World War I, he worked as the Chairman of the local Counsel of Defense.