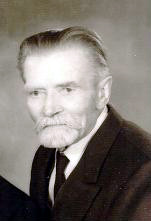 Jacob Gerhard Thiessen: minister and evangelist; born 2 May 1876 in Muntau, Molotschna Mennonite Settlement, South Russia to Gerhard Peter Thiessen and Maria (Friesen) Thiessen. On 5 January 1897 Jacob married Sara Goetz (born 10 November 1878) in Fürstenwerder, and they had twelve children, one of whom died in infancy. He died on 25 February 1967 in Vancouver, British Columbia, Canada.

At the age of 18 Jacob began teaching school, teaching in Fürstenwerder from 1894 to 1898 and Rückenau from 1898 to 1906. On 15 May 1899 he was baptized and joined the Mennonite Brethren Church. He attended Bible studies and participated with Professor Stroeter and Benjamin Unruh, two well-known theologians. Showing promise as a pulpit speaker, he was invited to join Jacob W. Reimer, a senior traveling evangelist who was ministering in the villages and churches and sometimes meeting with Russian congregations. Reimer was a mentor to the younger Jacob Thiessen. They encountered resistance from the Mennonite leaders since the government forbade proselytizing amongst the Russian Orthodox. Reimer and Thiessen, however, continued to evangelize and to preach. Eventually Jacob Thiessen was ordained as a minister in the Mennonite Brethren Church.

In 1923 Jacob and Sara immigrated to Canada with their children. They settled on a farm in Dalmeny, Saskatchewan and joined the Mennonite Brethren Church. Farming was not to Jacob's liking and he often traveled to preach in churches across Canada and in the United States and left the boys to do the farming. He became well known as "Reverend Jacob G. Thiessen," a dynamic and effective speaker at revival meetings and Bible exposition series.

Thiessen was an avid student of the Bible and often spoke on topics such as "God's Kingdom on Earth", "The Second Coming of Christ", "The Gospel of Jesus Blood and Righteousness" and related subjects. He had a talent to make these topics relevant and practical. To make his listeners think, he would ask provoking questions such as: "What was the last thought you had before falling asleep? If the Lord called to take you home, are you ready? Is your conscience clear?" Under his ministry many persons, young and old, made decisions to become followers of Jesus.

In 1938 Jacob and Sara moved to Vancouver, British Columbia and joined the fledgling Vancouver Mennonite Brethren Church. Jacob became the first pastor of the church. Before long, fifteen candidates declared their willingness to be baptized.

Jacob Thiessen took a lively interest in people. He always had time to give a word of encouragement, especially to the young people. During the 1940s and 50s, many persons came into the city to work and Jacob Thiessen was a spiritual father to them. He was fairly "liberal" in his view of some behavioral issues, but he was very concerned about the spiritual welfare of people. After retirement as pastor in the early forties, he continued to preach in the church occasionally and to serve as chaplain for the Mädchenheim (Bethel Girls' Home) in Vancouver. Being fluent in Russian, he had a burden to carry the gospel to the Russian people in the city and he ministered in their congregation for many years.

Jacob and Sara Thiessen celebrated their seventieth wedding anniversary on 5 January 1967, only six weeks before Jacob passed away.