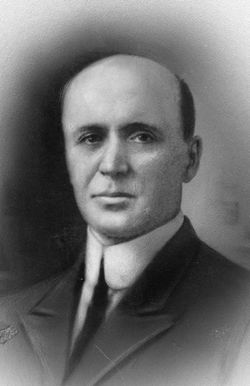 John R. Thierstein (1867-1941): a Mennonite (General Conference Mennonite [GCM]) teacher of modern languages, editor and conference worker; was born in Bowil, Swiss canton of Bern, 22 July 1867. In 1882 the family came to America and settled on a farm near Whitewater, Kansas. He attended the Mennonite Seminary at Halstead, graduating in 1892, and secured his A.B. degree in 1896 from the University of Kansas. On 2 October 1895, he married Margaret M. Dirks.

Thierstein had begun his teaching career upon his graduation from the Halstead Seminary. He taught in several Kansas schools 1896-1903, and at Bethel College 1903-4. In 1904 he became president of Freeman Junior College, serving for four years. In 1908 he returned to Switzerland for graduate work, receiving his Ph.D. from the University of Bern in 1910. His dissertation was entitled Novalis und der Pietismus (Bern, 1910). For five years he then served as principal of the Atchison County (Kansas) High School. In 1915-21 he served on the faculty of Bluffton College, after which he came to Bethel College, where he served until his death in such capacities as professor of education, German, and French, director of the teacher placement bureau, and editor of the Bethel College Monthly.

Thierstein also served many years as a member of the General Conference Board of Publication, being chairman at the time of his death (1941). He had served two terms as secretary of the GCM Church and was a member of the Historical Committee of the General Conference at the time of his death. In 1937-41 he was editor of The Mennonite. As chairman of the Board of Publication he also contributed substantially toward the production of the Mennonite Hymnary. While in Switzerland the Thiersteins had adopted a son, Frederic Novalis, who died as a young man in 1926.