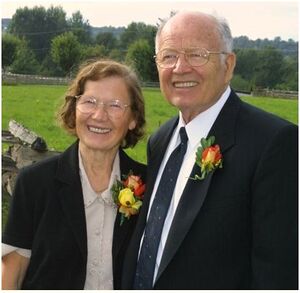 When Albert was 7 years old, his father was arrested in January 1938 and imprisoned by the KGB (Komitet Gosudarstvennoy Bezopasnosti or Committee for State Security). On the night that he was arrested he told Albert that he was a big boy and to look after his four year old brother, Jacob. He took his charge very seriously, preventing him from ever being a care-free adolescent or teenager.

In 1943 Albert with his mother and relatives were able to leave Ukraine by train with the retreating German army. The trek took them to Poland and then East Germany at the end of World War II. In July 1946 Albert was baptized in Ottenstein, Germany.

In 1948 the family immigrated to Grassy Lake, Alberta. From there they moved to Coaldale. Here Albert attended the Coaldale Bible School for 3 years. Later Albert spent another year at Mennonite Brethren Bible College in Winnipeg.

Albert’s passion was to share Christ with as many people as possible. Thus his desire was to be a missionary. In College he realized that he would never become an eloquent speaker. With this discovery, Albert’s transitioned from being a missionary to supporting as many missionaries as possible.

After Albert and Mary’s wedding in 1954, the couple settled in Vancouver where they joined the Vancouver Mennonite Brethren Church. He worked as carpenter for the first few years of marriage and then started his own thriving construction company. There were many times throughout his career when the market was very challenging. In all these difficulties he trusted God for guidance in his decisions.

Supporting God’s work brought tears to his eyes as a most treasured privilege. He considered his tithe to be 20% from his business and 20% again from his personal income. One of his favorite causes was supporting LOGOS Society Canada, on whose board he served from 1995 to 2004.

Involvement in a Mennonite Brethren church was very important to Albert, being active on the Board of Management in each the three congregations to which he belonged. The move from Vancouver to Burnaby led him to become involved with the founding of Willingdon Mennonite Brethren Church.

Albert also participated in the birth of Columbia Bible Camp at Cultus Lake (now Stillwood Camp & Conference Centre). Albert and Mary moved to Abbotsford in 1978, where they became active members of the Central Heights Church. Here they joined other church families in sponsoring a refugee family from Laos. Further, owing to Albert’s initiative, the church established a Legacy Fund, whose principal purposes included leadership initiatives, church planting, and missionary initiatives.

Albert and Mary loved to welcome people into their homes, making many newcomers to Canada feel valued. In 2006 Albert was moved to Menno Hospital and died in October 2007. He is remembered for his generosity and strong faith in God not only by his family but by many whose lives he impacted.

In the memorial service one son’s tribute was as follows: "We learned from watching Dad that business and all our life’s endeavors are initiated with a vision, planted as a seed of faith, executed with trust in God, and received as a gift from God. Dad had a deep value for the free-enterprise system like his grandfathers before him, and his freedom in Canada to pursue his ventures in faith, trusting in the Lord each step of the way. For him business was a spiritual end."