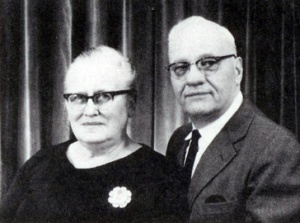 Henry received his elementary education in Neukirch. He was baptized with his father and joined the Allianz Church in Lichtfelde. He enjoyed singing in the choir as well as in a family quartet.

Henry immigrated to Canada in 1926, arriving in Leamington, Ontario. He taught Sunday school and was soon elected to the ministry.  After their marriage, Henry and Lydia attended Winkler Bible School, graduating in 1943.

In 1944 the Kitchener Mennonite Brethren Church ordained Henry to the ministry. He served as leading minister in the church for four years. This was followed with a three-year term in Japan with Mennonite Central Committee with the intention of opening a Mennonite Brethren mission. They served in Japan from 1949 until 1952 when they returned to Kitchener due to illness.

In 1957 the Mennonite Brethren Conference of Alberta invited Henry to work as a city missionary in Calgary and to assist in the newly begun church in the city. They served here for seven years before relocating to Clearbrook Mennonite Brethren, where he served as leading minister from 1964 until 1968. Hardening of the arteries became a health concern for Henry, and he chose to resign from his work as pastor. However, his health concerns subsided after a time and he was able to accept a call from the Yarrow Mennonite Brethren Church to serve as leading minister. After three years he officially retired and the couple moved to Clearbrook.

During the next ten years Henry preached on various occasions and served as a member of the Mennonite Brethren Board of Missions.

In 1981 Henry's kidneys began to fail and for the next four years he received dialysis treatment. Doctors chose to operate on 3 April 1985, but Henry did not recover from the surgery.