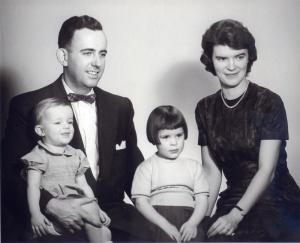 Harvey was baptized as a teenager in the Steinbach Bergthaler Mennonite Church. He started High School in Steinbach, and at the age of 16 moved with his parents to Altona, Manitoba. After completing his secondary education he taught at Norway House Indian residential school for one year, then spent most of a year in charge of a United Church mission pastorate at Island Lake, Manitoba. There, he had a church base but visited his native Indian congregation using a canoe in summer and dog team in winter. The destruction of the church building, by fire, ended that phase of his ministry. It was followed by a period of teaching in the Mennonite community of Halbstadt, Manitoba.

In 1948, Harvey completed a year at Grace Bible Institute (later Grace University, Omaha, Nebraska). That summer, as one member in a three man Peace Team he met Iva at the first reunion of Canadian World War II conscientious objectors, held in Kitchener, Ontario. The reunion and peace rally had been arranged by J. Harold Sherk, and Iva had been assigned to help her father in the book tent.

In fall 1948 Harvey transferred to Goshen College, Indiana, where in early 1951 he completed his bachelor’s degree in History. Harvey worked in accounting in Toronto, Ontario from the spring of 1951 to the end of summer 1952. He and Iva, a medical student at the University of Toronto, married 2 June 1951. In fall 1952 Harvey entered Goshen Biblical Seminary while Iva undertook her internship in Toronto.

Harvey's seminary plans were interrupted at the invitation of Orie Miller, Executive Secretary of Mennonite Central Committee (MCC). Orie arranged for Harvey to manage the MCC’s Canadian office (then located in Waterloo and later in Kitchener). This assignment was taken up in February 1953.

Harvey's church affiliation changed with his location and assignments. In Ontario he first joined Iva’s church (Bethany). Later, when he was asked to conduct Sunday evening services in German at Preston Mennonite Church (for the benefit of recent immigrants), he and Iva joined that congregation. When these services were no longer required Harvey and Iva joined the newly established Rockway Mennonite Church in Kitchener, fall 1960.

Harvey W. Taves would serve as director of Mennonite Central Committee’s Canadian office from 1953 to 1964, and director of MCC Ontario from 1964 to his death in 1965. Challenging older leaders who cautioned against taking risks, Taves moved ahead with enthusiasm. In his role on the executive of the Conference of Historic Peace Churches, for instance, he was able to convince them that establishing Ailsa Craig Boys’ Farm for juvenile delinquents was one way Mennonites could express their gratitude for the conscientious objector privileges granted them during World War II.

Harvey's passion and vision for peace and service manifested itself as well in various innovations. These included Mennonite Disaster Service and Voluntary Service units, placing teachers and nurses in outport areas of Newfoundland, Canada. He also played a significant role in the creation of Conrad Grebel (University) College, established in 1963 on the campus of the University of Waterloo.

Harvey's health became an increasing concern. In fall 1951, at age 25, he had his first asthmatic attack. In the early 1960s the attacks became more frequent and severe. During the last year of his life, trips to the hospital were frequent. His death at age 39 at the Kitchener-Waterloo Hospital on 11 May 1965 was caused by pneumonic complications in his asthmatic condition.

In the last year of his life, Harvey served as Executive Director of MCC Ontario, now a regional office of MCC Canada. Although the change which placed the Canadian head office in Winnipeg, Manitoba, was difficult for him to accept, he did so with grace. Agreeing to stay on as part-time director of the new MCC Ontario, Harvey also worked on a graduate degree in sociology at the University of New York at Buffalo (New York).

During this transition period, Harvey W. Taves wrote to a fellow administrator in the MCC: "It is wonderful to have been, and still to be, a part of the MCC program. It is my belief that this program is the most exciting part of the Mennonite witness." The memorial plaque placed at the MCC Ontario headquarters articulates well Harvey W. Taves' passion and his mission: "As one of Christ’s men, he devoted his life in the service of the church to the ministry of alleviating human suffering."

Marr, Lucille. The transforming power of a century: Mennonite Central Committee and its evolution in Ontario. Kitchener, Ont.: Pandora Press, 2003.