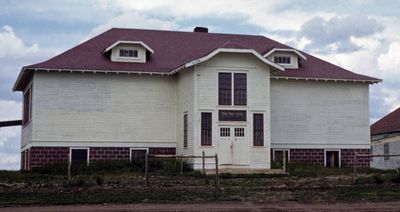 The Tabor Bible School (also known as Dalmeny Bible School) began its first year of operation in the fall of 1928. It was preceded by several years of classes in a small Bible school, first conducted in a granary on the farmyard of Bernhard Fast, then in a local school and in a local church. Instructors in the early years included Wilhelm Regehr, Peter J. Friesen, Abraham Wiebe, Hermann Fast, and Cornelius Kliever.

According to a report, 14 young people from the area had attended four Bible schools in other places during the previous winter. These schools were the Bible Institute of Los Angeles (Biola), Tabor College in Hillsboro, Kansas, Herbert Bible School, and the Winkler Bible School. The need was obvious. In the summer of 1926 several meetings were conducted to explore the possibilities of establishing a school and some funds were raised. A meeting to plan more specifically for a Bible school was held on 22 August 1927, and a decision was made to build a school in Dalmeny.

The school opened its doors to students for the first time in November 1928, even though the building was not yet completed. 43 students enrolled. The first teacher was Johann Goerz. On 28 October 1929 the school opened again with an increased enrolment of 59 and an additional teacher, former missionary Franz Wiens. It was during this year that the school was named "Tabor Bible School," although it was often popularly referred to as "Dalmeny Bible School." Eventually three classes were offered.

The school was officially an interdenominational school, although primarily supported by Mennonite Brethren. Abram A. Unruh, later missionary in India, was appointed to the faculty in 1932. Jacob H. Quiring, later President of the Mennonite Brethren Bible College, was a student and also an instructor and President (1941-44). Other presidents were Johann Goerz, Franz Wiens, E. Epp, Henry G. Remple, and Orlando Wiebe.

The school suffered a gradual demise and was closed for a year in 1951-52. In 1954 it closed permanently. Many of the graduates of the school became leaders and pastors in various congregations. The school also promoted missions very actively. The catalogue for 1947-48 listed 18 missions agencies represented in the school.