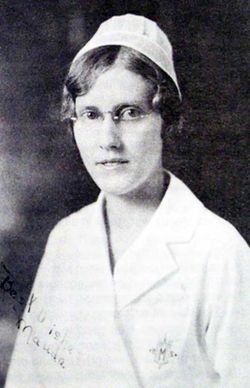 Maude Barbara (Egli) Swartzendruber: nurse and educator; born 8 October 1903 to Christian B. Egli (22 November 1874-22 April 1959) and Emma Grimm Egli (2 April 1877-26 June 1934) at Hopedale, Illinois. She was the fifth child and oldest daughter in a family of 13 children. On 3 March 1927 she married John Swartzendruber (15 December 1899-10 December 1928). They had no children. At the time of their marriage John was working for a grain dealer in Weiston, Iowa. He died of complications shortly after surgery for acute appendicitis. Ironically her mother died in 1934 of a ruptured appendix. Maude Swartzendruber died 26 November 1990 in Kalona, Iowa.

Maude moved with her family from her childhood home in Illinois to a large farm near Manson, Iowa in 1912. She had the usual elementary education, but did not complete high school. After her husband's sudden death, she enrolled in the Winter Bible Term at Hesston Academy in Kansas in January 1929. She continued at Hesston until she received her high school diploma in 1931. The following three years she studied and worked at the Mennonite Hospital School of Nursing at La Junta, Colorado. She received her R.N. in 1934. A scholarship enabled Maude to attend Colorado State College of Education at Greeley, 1935-36, and the following year at Goshen College she earned her B.S. degree in education.

Her interest in the training of Christian nurses led Maude Swartzendruber back to La Junta in the fall of 1937 where she taught nursing sciences for one year. The next five years she taught and supervised in the surgical nursing division of the hospital. She then became Director of the Mennonite School of Nursing and the Nursing Service at the Sanitarium in La Junta, Colorado, from 1943 to 1956. For five of those years she served on the Colorado State Board of Nursing. From 1957-1963 she served as Director of Education at the Mennonite Hospital of Nursing in Bloomington, Illinois. From 1963-1966 she established the department of nursing and was Director of Nursing at the new Huerfano County Medical Center in Walsenburg, Colorado. She served as college nurse at Hesston College from 1967-1972.

With her leadership in professional nursing, she helped to found the Mennonite Nurses Association and served as its first President. Maude Swartzendruber retired to Schowalter Villa in Hesston, Kansas, where in 1975 she completed The Lamp in the West, her history of nursing in La Junta. She also edited the La Junta Alumnae News for many years. Maude Swartzendruber was a major leader in Mennonite medical education for many years. She is buried in the Rose Hill Cemetery, Manson, Iowa.