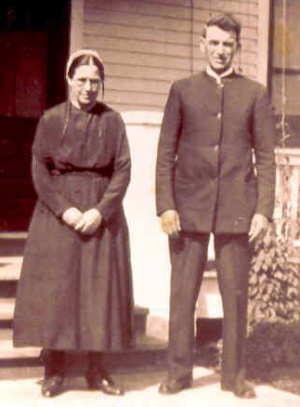 The Stutzmans moved from Nebraska to the Tofield district in 1911, shortly after a new congregation had been organized there. In 1912 and 1913 he served as Sunday School Superintendent in the Salem congregation, and was ordained a deacon in 1913. The next year, on 29 November 1914, he was ordained a minister in the congregation. From 1919 until 1923 Stutzman attended the Bible Academy of Hesston College in Hesston, Kansas. After his return to the Tofield district he made his home on a farm near Kingman while serving the congregation as a minister. He also worked as a teacher, evangelist, singing instructor and conference secretary, and took an active part in the work of the Alberta-Saskatchewan Mennonite Conference. In 1934 he joined C. J. Ramer and Ezra Stauffer to teach in an itinerant Winter Bible School. During World War II he made many trips to the conscientious objector work camps in Alberta. He was always keenly interested in the activities and spiritual welfare of the youth in the congregation and in conference activities. He read widely, took a keen interest in scientific phenomena, and enjoyed considerable mechanical skills which he used innovatively, particularly in the difficult days of the Great Depression of the 1930s.

The high regard in which members of the congregation held him was given expression when members nominated him several times for ordination as bishop. But the lot did not fall on him. Undeterred, he continued his work as a teacher, preacher, counselor and evangelist. He was an excellent conversationalist and story-teller whose preaching emphasized Christian discipleship. He believed strongly in historic Anabaptist and Mennonite teachings which emphasized that followers of Jesus must not only believe in him as Savior, but also as Lord over all aspects of their lives. In his later years he was the Grand Old Man of the conference. He died just short of his 100th birthday.

Round Hill & District. Salute the Pioneers - available at the Glenbow-Alberta Institute in Calgary.