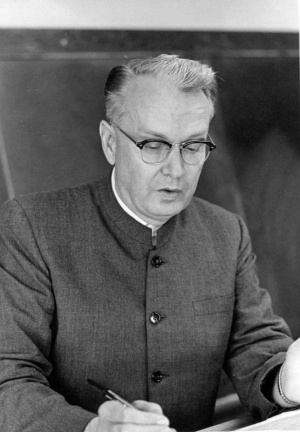 A graduate of Goshen College (BA), University of Pittsburgh (MA), and Union Theological Seminary in Richmond, VA. (BD and ThD), Stoltzfus served the church as a teacher in the classroom and in numerous conferences, frequently with Ruth, on the theme of strengthening family life; as a historian and the author of the well-regarded Mennonites of the Ohio and Eastern Conference (1969); as a member of several local and bi-national committees including Park View Mennonite Church and the Historical Committee (MC); as editor of the Mennonite Com<em>munity Magazine</em> (1947-1953); and as administrator of Civilian Public Service units for Mennonite Central Committee (1941-1946).