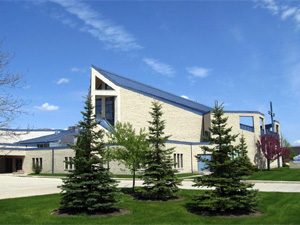 The Steinbach Mennonite Church in Steinbach, Manitoba, began services on 17 July 1938, and formally organized in 1939. Isaac Warkentin is considered the founding leader of the group. Mennonite immigrants from Russia had settled in the Steinbach area in the 1920s. They worshiped in the existing congregations there until the 1930s. In 1936 a group was formed as part of the Schönwieser Gemeinde. In 1942 they became an independent congregation.

The members of Steinbach Mennonite Church met in a rented building on Hanover Street until 1941 when the need for a building of their own became apparent. A lot was purchased on the corner of Reimer Avenue and Hanover Street. With the help of volunteers, the building was finished in the spring of 1942 at which time the sanctuary was dedicated. In 1951, three lots were bought on the outskirts of Steinbach (what was later the corner of Barkman Avenue and Hanover Street). Construction began in May 1951. The new building was built with a capacity for 352 people with a budget of $28,000. It was dedicated on 7 October 1951. In 1971 the congregation began to look into options for expansion. It decided to expand by constructing a new building (sanctuary with a basement) next to the existing building. Ground-breaking took place in April 1974 and by December it was completed and SMC held its grand opening. In 1983 space again became an issue. The congregation required a larger sanctuary and more Sunday school space, Itpursued selling the current property and building a new church on Loewen Boulevard (then called Townline Road). The new space featured an 800-seat sanctuary with a large stage, a large foyer, grade-level entrance for wheelchair accessibility, a combined gym and banquet hall for 500, and a larger education wing. Ground-breaking for this project began in 1988 and was completed in 1989.