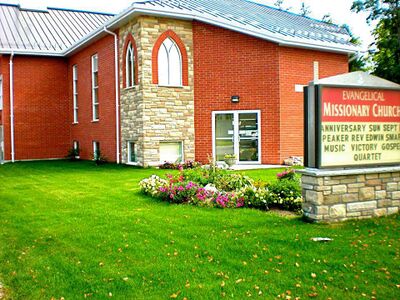 Through the 19th century, many Mennonite families in search of inexpensive productive farmland moved to the area between Port Elgin and Stayner in southwestern Ontario, Canada. Though the Mennonites in that century still spoke German the Great Awakening influenced many. Some congregations developed Sunday Schools, encouraged new forms of evangelism and were influenced by Wesleyan Methodism. Those who were dissatisfied with the old forms of worship and church practice separated from the Mennonite Church (MC) to form their own congregations and conferences. By the turn of the century, English had mostly replaced the German language. In 1881 a new congregation was established in the village of Stayner, Ontario; in 1883 it joined the newly formed Mennonite Brethren in Christ Church.

About 1890, the local Methodist congregation moved to new accommodations, and the Stayner congregation purchased its church building on the corner of Main and King streets. In 1894 it moved the building to its current location at 202 Ontario Street. It bricked the building in 1905. The congregation added a basement for Sunday School rooms in 1948.

The Stayner congregation was part of a local pastoral circuit that included the Ebenezer United Missionary Church near Sunnidale, located about 15 km. to the northeast and a preaching appointment in Wasaga Beach about 7 km. east. Mennonite Brethren in Christ polity changed pastors every three years. In 1963 the rural Ebenezer United Missionary Church amalgamated with Stayner. This necessitated building a larger auditorium. In 1975 an education wing and gymnasium were added. An electrical fire on 2 January 2007 destroyed much of the building but the congregation met at the Stayner Camp and in April 2009 it dedicated its rebuilt church building.

By the beginning of the 20th century, Stayner has maintained a vibrant Sunday School program. The Missionary Women of Canada began in 1924 as a "Mission Circle." Its youth program began in 1937 and continued more recently as a "Kidz Klub" and EPIC Youth for older children. These programs have attracted non-church children. As Canada entered World War II those churches strongly opposed to militarism formed the Conference of Historic Peace Churches and chose Stayner's pastor, J. Harold Sherk, as its secretary. He served on this committee for many years.

In Ontario, evangelism efforts included camp meetings, earlier known as "bush meetings," which were held as early as 1881 and are considered as a predecessor to Christian camping. In 1925 land on Scott Street, only 750 m. north of the church was purchased and became the Stayner Bible Conference Grounds. In 1931 the camp committee planted seedlings that matured into a white pine forest. Over the years improvements such as a kitchen and dining hall were added. In 1947 the Tabernacle building was completed. Improvements continued to meet the needs of a changing youth camp program which in 2021 was used year-round.

History of Missionary Church at Stayner, Mennonite Archives of Ontario.