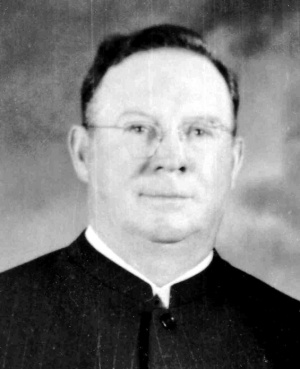 Ezra Stauffer: minister in the West Zion Mennonite Church near Carstairs and of the Salem Mennonite Church near Tofield, was born near Milford, Nebraska, on 15 February 1898, and died on 1 August 1955 near his home at Tofield, Alberta. He married Irene Lehman on 20 August 1920. Two sons and three daughters were born to that union. After his first wife's death on 18 February 1945 he married Stella Good Huber (3 October 1910-23 February 1981) on 6 April 1949. They had one daughter.

The Stauffer family moved from Nebraska to the Tofield district of Alberta in the spring of 1913. Here Ezra Stauffer was converted and baptized in the Salem Amish Mennonite Church. After a year of study at the nearby Bardo High School, Ezra continued his studies, until 1920, at the Hesston Academy in Hesston, Kansas. He and Irene served briefly with a mission in Portland, Oregon, in 1924, but spent most of their married lives in the Tofield district. In the Salem congregation Ezra served for many years as Sunday School Superintendent.

In 1945 Ezra Stauffer was invited to consider service as a minister in the West Zion Mennonite Church near Carstairs. He was selected by lot, ordained on 28 June 1945, and the family moved to Carstairs. But he was unable to find a viable occupation to earn sufficient money to support himself, and in the spring of 1948 he requested a release from his assignment in Carstairs. He returned to Tofield, married a second time, and served the Salem congregation as a minister until the time of his death. He was one of the regular and highly influential teachers in the Winter Bible School and also accepted invitations to teach short Bible courses, usually on Bible prophecies, at Mennonite Bible Schools in Ontario and Oregon. He also served for twenty years as the historian of the Alberta-Saskatchewan Mennonite Conference compiling a substantial amount of congregational and biographical material which was, however, only published by the conference after his death. He was affected with a heart condition from the spring of 1950 and suffered a fatal heart attack in 1955.

Obituary notice for Ezra Stauffer in the Gospel Herald (6 September 1955).