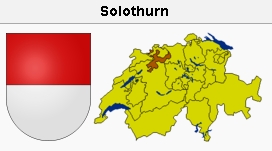 Solothurn is a Swiss canton bordering on Bern, predominantly Catholic, in which the Anabaptist movement also gained entry, though it was not so strong there as in the canton of Bern.

The council of Bern carried on negotiations with Solothurn repeatedly in the 16th century on the Anabaptist question. On 10 January 1531, it sent a letter to various districts bordering on Solothurn calling attention to the fact that the Anabaptists had recently held a general meeting, at which it had been decided to extend their missionary activity to the canton of Solothurn; "Since their misleading sect and separatistic Pharisaic hypocrisy full of all evil, wickedness, and sedition and contrary to the government instituted by God, are said to teach and to attach the common simple folk to them and deceive them, we therefore command you to watch such people closely and take care especially of the pious that would be influenced thereby" (D. M. R. 467 Staatsarchiv Bern). On 2 February Bern called the attention of Solothurn to Anabaptism practiced secretly in the border districts, Wangen, Aarwangen, and Niderbipp, and on 18 May it reminded Solothurn that the "deceiving obstinate Anabaptists" had been staying in Overlinsbach, and that this "sect entirely unworthy of the common Christian status" should be expelled. Solothurn took its time to expel the Anabaptists. From this time on Bern continued to complain about Solothurn's careless attitude whereby the Anabaptist preachers were greatly helped. The Anabaptist movement continued to increase in the Swiss confederacy especially in the Protestant cantons of Zürich, Bern, Basel, and St. Gall. The Anabaptist problem had become a very difficult one for the authorities of the Protestant estates, after all the violent measures for its extermination had proved fruitless. At the parliament in Baden in 1530 it was decided to arrest the Anabaptist leaders and punish them severely in body and property.

On 5 February 1532, Bern complained that Anabaptists were holding secret meetings in the canton of Solothurn. And on 16 March Bern requested Solothurn to report to "my lords" in Bern the names of those who did not come to the preaching service. Bern even found it necessary to send delegates to Solothurn to present its request either to punish the Anabaptists themselves or to permit the Bernese government to reach into Solothurn and punish them. This led to stricter steps by the council of Solothurn; all foreign Anabaptists had to leave the country within two or three days and pay a fine of 10 pounds. 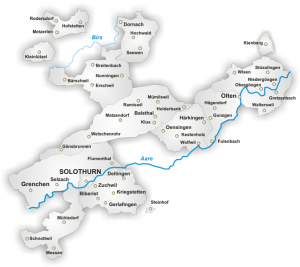 On 1-9 July 1532, the big Anabaptist colloquy of Zofingen took place. Bern requested Solothurn to send the Anabaptists from their canton to Zofingen, but it seems that the Solothurn Anabaptists were at first not willing to appear in person, but wished to give a written account, because they "were entirely sure of their faith and therefore needed no colloquy." Bern, however, demanded that Solothurn see to it that at least the Anabaptist preacher Lincki, whom the Reformed clergy of Bern considered a clever hypocrite, came to the disputation. Lincki was active in Lostorf and Egerkingen in the canton of Solothurn.

In 1533 and 1537 there were again negotiations between Bern and Solothurn on Anabaptist matters since the Anabaptists were meeting on Solothurn soil, holding their meetings in Aetingen and Lüsslinen. In 1545 the council issued a general order to expel the Anabaptists within a week; those who were found after that period were to be tortured. A year later the provost of St. Ursen complained about "non-Christian" meetings. Toward the end of the 16th century the council passed several regulations expelling the Anabaptists and confiscating their property.

The council of Solothurn was also worried by the immigration of Anabaptists from Basel. Since the Anabaptists in the north of the canton of Solothurn in the region of Weinwil fled to Seehof in case of danger, and into the Münster Valley, which was in the bishop's district, the council negotiated on this matter with the Bishop of Basel.

The efforts of Solothurn to gain control of the Anabaptist movement by means of expulsion were only partly successful. In the 17th century it flared up anew. Beginning in 1676 a long line of orders and mandates were published by the council; the magistrates were advised to pay close attention and to institute the sharpest investigations, "so that such weeds can be exterminated before they grow up." In 1697 the homes were searched for dangerous books. In 1707 the pastors were asked what people were neglecting religious services in the churches.

In spite of the mandates the council had to admit in 1710 that the Anabaptist movement was not yet extinguished in Solothurn. In October 1719 a mandate was issued (renewed in November 1725), which imposed a fine of 100 guilders on anyone who would give or sell them any land, lodging, or food.

The Anabaptist movement had apparently become rather strong in Lüterswil; members here were Hans Bandi, Elsbeth Mollet, Urs Stuber, Hans Dick, Peter Mose, Urs Rätz, and in Lüterkofen, Urs Nussbaum, who was found in La Meutte in the Jura. In October 1711 Magistrate Reder reported on his dealings with several Anabaptists who had refused to render the oath of obedience, with the comment that "among them yes and no were as much as an oath, and their conscience did not permit them to give more."

Gotthold Appenzeller wrote the following (Jahrbuch für Solothurnische Geschichte): "On 18 April 1757, Johann Karl Grimm reports that he has found out from a dependable man when and in whose home the meetings were held at night. Therefore on the past Saturday night toward 1:00 he had found the people in Stephan Jaggi's house in Gossliwil, and questioned them, taking the names of all the men, had locked up their books, writings, and other effects and had taken Stephan Jaggi and Niklaus Knörr to the authorities. One of them had let a child die unbaptized and had an unbaptized four-year-old." About 20 persons had taken part in the meeting. This was a severe blow for the Anabaptists in the Bucheggberg. To the council this successful coup was very significant. A detailed opinion about it was published, which states among other things: Art. 1: That the Anabaptist sect had been found harmful as early as 1500 by the entire praiseworthy confederacy, they were therefore nowhere tolerated and in short "exterminated from all the villages out of your grace's lands without hesitation and shall be wiped out." The Anabaptists in the Bucheggberg were no longer to have the boldness to hold a meeting on this territory. By rendering an oath they were to desist from their faith, and if they refused, "all these sectarians shall clear the land," in order that "this region all be cleansed, depopulated, and as much as possible untrodden by that kind of people." Art. 2 designated that the Anabaptist property at Bucheggberg be managed by a special magistrate. Art. 3: The two preachers, Stephan Jaggi and Niklaus Knörr, were each to be fined 100 pounds. Furthermore, all who attended the meeting, whether they were really Anabaptists or not, were to pay a fine of 10 pounds. Art. 4 says that the Anabaptists must in addition pay the costs for the soldiers in the inn. Art. 5 gives information on the inventory of the Anabaptists arrested in Bucheggberg. The capital amounted to 8,425 pounds and the "poor" capital of the Anabaptist congregation 2,914 pounds, a total of 11,399 pounds. Their private property was to be left them, but the property of the congregation should be taken from them and used for the benefit of the churches.

On 16 May 1757, the council ordered that the confiscated books be committed to the Capuchin monks. On July 15 the Anabaptists were ordered to leave the canton by 29 September. On 17 August 1757, "Altrat" Vogelsand asserted that Jaggi "has lost his mind." The preacher Knörr had to leave his property in Bucheggberg and leave the canton with only 40 crowns. He died in Plagne above Biel (Jura) in July 1773. That was the end of the Anabaptist congregation on Bucheggberg.

In other parts of the canton of Solothurn there are also traces of the Anabaptists in the 17th and 18th centuries. In Kriegstetten, Madle Luterbacher, Caspar Wiedmar, and later Mathis Kaufmann broke out of the prison.

In the district of Falkenstein Franz Fluri and his wife were found, who still "persist in the damned Anabaptist sect." Further it was reported that the Anabaptists detained in prison refused to give up their faith, but at the same time they requested the council to release them to leave the country. But the council decided to have the clergy visit them in prison and "instruct them in our true religion." If they refused to be converted by teaching, other means should be used. The magistrate declared that the persecution of the Anabaptists was difficult to carry out in winter with the great masses of snow and impenetrable mountain roads, for the Anabaptists were meeting at night in the mountains bordering on the bishopric. On 28 March 1731, the council received the report of the magistrate of Falkenstein that Margareth Loosli, Catharin Obersteg, Hans Kaufmann, and others in the district, charged with listening to Anabaptist preaching, were questioned; the main meeting of these people took place in the Münstertal; hence a letter should be written to the bishop in Pruntrut to assist them; if the people were encountered on Solothurn property, they were to be arrested or expelled. Considerable numbers of the Anabaptists were also found in the region of Welscherrohr and Gänsbrunnen close to the border, today in the Bernese Jura. Presumably most of them fled into the bishopric, where they found more toleration. In the powerful changes wrought by the French Revolution the last traces of Anabaptism in the canton of Solothurn died out.

In 1899 Christian Gerber of Bellelay moved to Emmenholz, near Solothurn. A number of families of his descendants have been living here since then. In 1957 monthly meetings of the Mennonite families were still held in the home of Abraham Gerber, preacher, at Brestenberg.