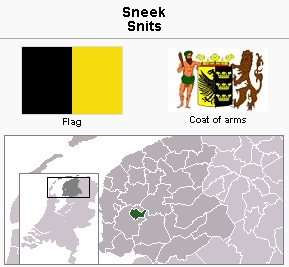 Sneek, a town in the Dutch province of Friesland (1952 population, 19,530, with 640 Mennonites; 33,115 in 2007; coordinates: 53° 2′ 0″ N, 5° 40′ 0″ E), the seat of a Mennonite congregation. Little is known of its early history. Elder Leenaert Bouwens baptized 54 or 55 persons at Sneek during several visits in 1551-1582. In the early 17th century there were here three congregations: a Flemish, a Groningen Old Flemish, and a Waterlander congregation. Of the Flemish and the Groningen Old Flemish there is no further information; the Flemish united with the Waterlander church likely about 1620, the Groningen Old Flemish died out before 1731. The Waterlander (sometimes also called Flemish and Waterlander) congregation steadily increased in membership and in general could meet undisturbed except in the years 1600-1601. Shortly before 1600 the Reformed ministers of Sneek, G. Geldorp and Johannes Bogerman, tried to destroy the Mennonite congregation; they several times entered into the meetinghouse during services in order to address and "to convert" the Mennonites; they repeatedly held debates with the noted Mennonite leader Pieter van Ceulen, who was living at Sneek. But all their efforts failed. Thereupon they made a petition to the city magistrates, asking them to forbid the Mennonite meetings, and even to expel the Mennonites on the ground that there should be only one church and one confession in the state, namely, the true Reformed church and confession. The magistrates, more intimidated by their audacity than convinced by their arguments—they were afraid of losing a good number of substantial merchants and skillful and industrious artisans—refused to expel the Mennonites as in particular Bogerman had demanded, yet resolved in 1601 to proclaim a mandate forbidding the Mennonites to hold meetings either in their meetinghouse or in private homes, on pain of heavy fines. Barend Jacobsz, however, one of the Mennonites, braving the mandate, organized a meeting in his home, and being fined, refused to pay the fine; thereupon some of his furniture was publicly sold. The mandate was, however, in the course of the year not strictly enforced and the Mennonites could meet again rather freely.

During the 18th century not all Mennonites living at Sneek belonged to the Waterlander congregation; a small number, more conservative in maintaining the old Mennonite doctrines and church discipline as well as in simplicity of dress, were members of the Groningen Old Flemish congregation at neighboring Ijlst. In 1746, however, the 17 members of this congregation who lived at Sneek, particularly it seems on the instigation of Wouter Berends, a wealthy brother of advanced age, separated from Ijlst and founded an independent Groningen Old Flemish congregation at Sneek. A house on the Kleinzand belonging to Wouter Berends was adapted as a meetinghouse, and Yde Rienks was called as their pastor, serving 1746-died 1763. The membership soon increased: 34 in 1754, 43 in 1767. Such outstanding families as ten Cate and Veen belonged to the Kleinzand congregation. Pastor Rienks was followed by Hidser S. Hoekstra, serving 1764-1772, and J. U. Siedsma 1775-d.l838, from 1831 assisted by the preachers of Kromwal and IJlst. In the course of time, particularly from about 1790, most members of the ten Cate and Veen families and some others left the Kleinzand church to join the "Groote Huis" or Singel congregation. In 1839 the Groningen Old Flemish group merged with the Singel congregation, after an attempt at such a merger in 1813 had miscarried.