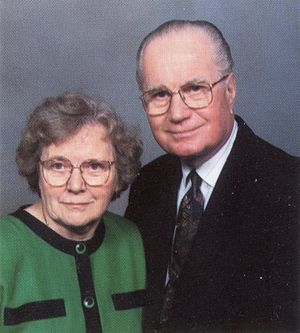 Leonard Bernard Siemens: university professor and agricultural specialist; born on 5 January 1926 to Bernard (18 September 1894-14 March 1972) and Katherine (Schroeder) Siemens (25 November 1900-1986) in Horndean, Manitoba, Canada. He was the eldest boy in a family of three daughters and three sons. On 13 September 1952, he married (Elly) Olive (Enns) Siemens (12 February 1925-6 May 2015). The couple had four children. Leonard’s career was in agriculture, and he helped establish the Canadian Foodgrains Bank in Winnipeg in addition to starting other farming-related programs overseas. He died on 25 April 2019 in Winnipeg.

Leonard Siemens was born to a farming family in Horndean, Manitoba. He attended high school at the Altona Collegiate Institute, graduating in 1944. Following his graduation, he was accepted to the Faculty of Agriculture at the University of Manitoba in Winnipeg. That summer, he was conscripted into the Canadian army but was exempted from military service due to flat feet. He returned to his university studies and graduated with an undergraduate degree in plant science. After working for several years, he returned to university and obtained a Master of Science degree in plant science in 1960 and a Master of Arts in sociology in 1965.

Leonard Siemens obtained work at the Manitoba Sugar Company in 1948. In this job, he worked with farmers to improve crops such as sugar beets and sunflowers and to market sunflower-seed oil. In 1956, he joined the Department of Plant Science at the University of Manitoba as an assistant professor and later became a tenured professor. He was hired as associate dean in 1975 and continued in this position until his retirement in 1989.

Meanwhile, Leonard Siemens married (Elly) Olive Siemens in 1952, and the couple had four daughters: Charlotte (1953), Rebecca (1955), and twins Janice and Judith (1960). They were founding members of the Fort Garry Mennonite Brethren Church in Winnipeg. In 1965, the family moved to Thailand, where Leonard worked for two years with six other university professors to establish Khon Kaen University while Olive taught English.

In addition, Leonard worked in many other overseas locations in South America, Asia, and Africa. One of the projects was establishing a faculty of agriculture at the University of Zambia, where he visited many times. He received honorary doctorates from Thailand and Zambia for his efforts there. He retired in 1989 but continued to be involved in agriculture-related work.

Leonard Siemens was an agricultural consultant for the Mennonite Central Committee and the Canadian International Development Agency (CIDA). He wrote extensively about issues such as food aid, sustainable food systems, and education. In 1983, he helped to establish the Canadian Foodgrains Bank, an agency that distributes emergency food to people in need, as well as helping in training, advocacy, and education.

With his health declining, Leonard spent his last four years at Donwood Manor Personal Care Home in Winnipeg. He died on 25 April 2019.

Leonard Siemens was dedicated to helping other people through his career in agriculture and his commitment to reducing world hunger. Throughout his life, he was an example for others to follow.