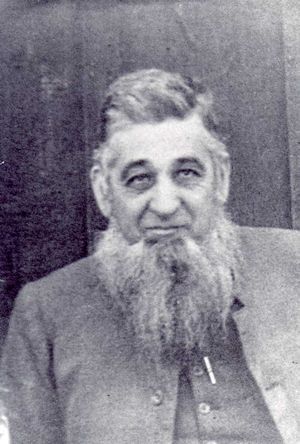 Peter Shirk: Old Order Mennonite businessman and local politician, was born 11 November 1839 near Churchtown, Lancaster County, Pennsylvania, USA to Christian Shirk (9 August 1796-19 May 1870) and Elizabeth Hoffman Shirk (25 November 1807-3 August 1862). Peter was the youngest child in a family of three girls and three boys. On 5 June 1866 he married Magdalena Martin (2 March 1845-7 November 1895); they had 13 children. After Magdalena's death, he married a widow, Judith Weber Krempien (4 July 1855-9 April 1942); they had one daughter in addition to the five children from her first marriage. Peter Shirk died 1 October 1919 in Bridgeport, Ontario, Canada; he and Magdalena are buried at First Mennonite Church in Kitchener.

Peter grew up on the family farm in Lancaster County, and apprenticed as a miller. In 1862 while the Civil War was raging, Peter and a sister, Barbara, moved to Waterloo County, Ontario, making Peter a draft dodger from the war. He worked a brief time for his uncle, Jacob Hoffman, who had a furniture factory and sawmill in Berlin (now Kitchener). Because of his experience in milling, Peter soon took a position at the Union Mills in Waterloo where he worked until 1866.

Peter Shirk had an entreprenuerial spirit and soon began operating his own mills. In 1866 he purchased the mill at Blair, Ontario, thoughhe sold it in 1869. In 1870, in partnership with Samuel S. Snider, he purchased the Lancaster Mills in Bridgeport. A sawmill and cooperage also operated near the mill. After Samuel Snider retired in 1887, Shirk continued as the sole proprietor. He then purchased the Baden Mills from James Livingstone in 1887. Shirk operated both mills until his death, after which they continued operation within the extended family until sold to the Waterloo County Co-operative in 1949. The Baden Mill was lost in a fire in 1942, and the Lancaster Mill burned in 1970. In its last years, the Lancaster Mill was operated as a feed mill for local farmers.

Although Peter held conservative theological views, he was an innovator in business practices. He had telegraph service installed at the Lancaster Mill at an early date, followed by installation of the first telephone in the town of Bridgeport.

In 1878 Peter Shirk was elected to the Berlin High School Board, and served on the board for 26 years, though none of his children attended high school. For 20 years (1892-1912) Peter Shirk also served as treasurer for the Township of Waterloo. His son, George, followed him in that position.

It appears that Peter and Magdalena Shirk were members until the 1890s at what became First Mennonite Church. However, three of their daughters were baptized in 1896 by Magdalena's brother, Abraham Martin, the founder of the Old Order Mennonites in Waterloo County. Peter strongly believed that Mennonites should remain separate from world. This was reflected in a series of letters he wrote between 1893 and 1908 to Jacob Mensch, a conservative leader in Pennsylvania. Shirk expressed concerns in those letters about worldly worship services, preachers taking too much pride their sermons, the conduct of singing schools in church buildings, erecting church buildings in the style of Protestant churches, and overemphasis on abstinence from use of alcohol and tobacco.