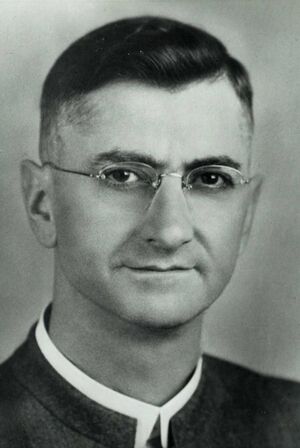 Jacob A. Shenk: parent, churchman, and businessman, was born 17 February 1900 in Denbigh, Virginia, USA, to Abram P. and Fannie (Coffman) Shenk. He was the fourth child in a family of five daughters and five sons. In 1926 he married Lucy Wenger (4 November 1902-12 January 1998), the youngest of 15 children of Jacob and Susannah Virginia (Suter) Wenger. Jacob and Lucy had two sons and two daughters. Jacob died on 24 March 1950. Jacob and Lucy are buried in the Lindale Mennonite Church cemetery, Linville, Virginia.

Jacob earned Bible and high school diplomas at Eastern Mennonite School (EMS); he also took a correspondence course in drafting. Without business training and with only part-time experience as a hatchery worker, he bought a small chicken hatchery in the 1930s and set up a partnership with himself as president and Lucy as secretary. Jacob organized the business based on his personal and spiritual ethics. He changed the structure of the business relationship with egg producers and guaranteed the chicks he delivered. His fair practices built a loyal base of producers and customers. By 1950, the Shenk Hatchery was the largest chicken hatchery in the state of Virginia. Lucy remembers that when the business began to profit, he felt very responsible to use the profits wisely. He told his nephew, Norman Kraus: “I do not take credit for this business succeeding. I think the Lord gave me this as a trust and I’m operating it on that basis.”[1]

Jacob’s active participation in the Virginia Mennonite Church included teaching Sunday School in a mission and at his home church, Lindale Mennonite Church. He was elected deacon by lot in 1940 and served on numerous Mennonite church committees. He once ranked his roles in life as first, husband and parent, second churchman, and last businessman. His children remember special times with their father, despite his busy schedule. Jacob valued Lucy’s ideas and regularly consulted her about business and church matters.

As a trustee of Eastern Mennonite College (EMC), Jacob was on the Finance, Administrative Study, and Building Committees. His leading role on three major EMC building projects included drawing plans and overseeing construction on the north annex to the main administration building, 1941, the chapel, 1941-2, and the women’s dormitory, late 1940s. He became president of the Virginia Mennonite Mission Board in 1943. He was also on the General Mission Board of the Mennonite Church, Elkhart, Indiana.

Jacob was on the Board of Trustees of Rockingham Memorial Hospital, becoming Vice-President. He was a leader in the Park View Improvement Corporation, which brought sewage and sanitary services to the largely Mennonite community that developed around Eastern Mennonite College.

His life motto – Proverbs 3:5: “Trust in the Lord with all thine heart and lean not unto thine own understanding” – was prominently displayed in his office. One client, after meeting him in his office, declared that he had confidence in a man who believed this. Jacob became known in the local, state, and regional business world as a Christian businessman of high ethical principles. In a 1949 address to a southeastern poultry association meeting he suggested that convention business should not be conducted on Sunday, the Lord’s Day. He did not live to see this happen, but a local businessman told Lucy that the annual conference the following year conducted no business on Sunday.

Jacob was exemplary for his charitable giving. In the 1940s he enrolled in a U.S. government program under which, after 10 years of giving 90% of his profits to charities, all money given to charities would be tax free. His participation in this program only became widely known after his death and the government did not allow Lucy to finish the program. He gave to churches, EMC and other church institutions, the local hospital, and needy individuals; many of these gifts were anonymous. He was a businessman at a time and in a place where Mennonites did not respect this occupation; many viewed Jacob with suspicion when they observed the success of his hatchery business.

Jacob was known locally for his singing. As a student at EMS he sang solos and in several quartets. He loved classical music and sometimes piped this music through the hatchery`s public address system during the working day. He also worked in the somewhat conservative Virginia Mennonite Conference to change the rule prohibiting instrumental music in church, believing that this rule would mean the loss of many youth. He was able to bridge the chasm between the conservative and moderate elements in the conference to help change some strict church policies.

Jacob died in 1950 while flying home from exploring mission work when his plane crashed near Mountain City, Tennessee; his passenger, Melvin L. Weaver, was also killed. His death left a vacuum in all of the communities in which he had been involved.

Redekop, Calvin W. “Jacob A. Shenk: Business Was Servant to the Church.” In Entrepreneurs in the Faith Community: Profiles of Mennonites in Business, edited by Calvin W. Redekop and Benjamin W. Redekop. Scottdale, Pa.: Herald Press, 1996.

Warkentin, A. and Gingerich, Melvin, eds. Who’s Who Among the Mennonites. North Newton: Bethel College, 1943.