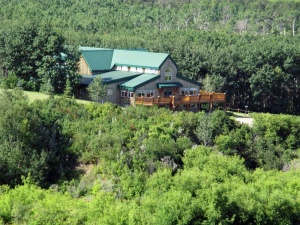 In the late 1970s Mennonite Church Saskatchewan became dissatisfied with the crowding and urbanization occurring at their Pike Lake Camp and began to look for a better site. The conference appointed a group led by Menno Nickel to find a more appropriate location for a year-round retreat center. In 1979 they settled on the current location on land donated by Art and Ruby Adrian, a local farming couple. The first year, camping took place in tents with the camp cook preparing meals on a wood stove under a canvas tarp. Lorne Friesen was the first camp director. Gradually permanent facilities were added, beginning with an open-concept lower chalet. In the mid-1980s, a proper kitchen was added. Since a portion of the land was a river flat with occasional spring flooding, raised platforms for tents were constructed. Next a manager’s residence was constructed so the camp could be used and cared for year-round.  Also in the 1980s two large but rather primitive cabins were constructed to sleep up to 40 people each. These cabins were electrified and had wood stoves for heat.

Once these facilities were in place, the camp board developed outdoor education programs for high school students. They also added more challenging physical activities and team-building techniques that taught survival skills. Environmental emphases accompanying most programs emerged directly from Mennonite theology of care for the earth.

In 2000 a new structure, called the Timber Lodge, was added to the retreat complex. It nestled among a grove of poplar trees overlooking the North Saskatchewan River valley and slept about 84 people with catering for up to 200. When constructed it was the largest timer-frame building in Western Canada. It incorporated recycled materials including lumber from the demolished Dundurn, Saskatchewan, grain elevator. It was built largely by volunteer labor in the tradition of an old-fashioned barn raising. Its striking architecture and setting were highly admired in Saskatchewan and became the subject of a documentary film titled: Edifice & Us: Shekinah by Sun Wolf Productions, Regina, Saskatchewan.

Shekinah Retreat Centre has operated year round with children’s camping in the two summer months and a wide variety of groups through the year. Churches, faith groups, non-faith groups, non-profit organizations, government agencies, family gatherings, anniversaries, weddings, and special events have all enjoyed Shekinah for its facilities, rural setting, and spiritual atmosphere. Motorboats and recreational vehicles are not permitted; televisions and internet are not available; and cell phones often don’t work in the valley. Many trails that have been created both on prairie land and in the bush make walking, hiking, biking, canoeing, cross-country skiing, and skating a spiritual activity.

Shekinah is affiliated with Mennonite Church Saskatchewan, and is a member of the Saskatchewan Camping Association and the Mennonite Camping Association. Facilities in 2011 included Timber Lodge which has been used for conferences, retreats, weddings, and family reunions; the winterized Chalet with facilities to feed up to 90 people and to sleep about 60; and a rustic Hermitage for those seeking a pioneer experience. In addition were two winterized cabins that slept 10 people each and a number of summer tent cabins. Year-round programming was available for various organizations and individuals, with full summer camping programs for children and youth operating in July and August. Shekinah's mission statement in 2011 was: “Shekinah is to be a setting where all who come, have opportunity to experience the presence and glory of God through discovery, reflection, interaction, community and nature." Shekinah is a Hebrew word meaning “the abiding presence of God.”