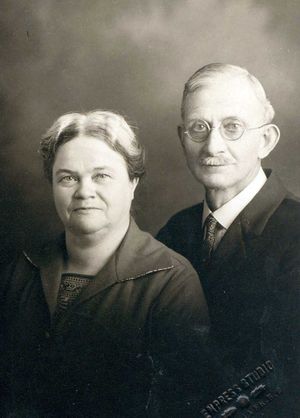 William Shantz was the first missionary approved and supported by a conference of the Mennonite Brethren in Christ Church. He gave 41 years' service in China with the Christian and Missionary Alliance (C&MA), 35 of those years with his wife Mary Davidson.

The parents of William Shantz were Enoch D. Schantz (6 August 1841-3 April 1920) and his first wife Catharine Ruthig/ Ruedich (31 May 1844-28 March 1875). William was born in Mannheim, Wilmot Township, Waterloo County, Ontario, Canada on 8 July 1866, the second oldest of five brothers and one sister, although two brothers died in infancy. The family moved to the Walkerton, Ontario, area where William's mother died when William was eight years old. From Enoch's second marriage on 11 February 1879 to Angeline Shoemaker (16 November 1854-1927), there were at least three other children.

William Shantz met Mary Deborah Davidson from Peterborough, Ontario, (20 September 1873-2 April 1948) in China and married her on 24 December 1901 at the C&MA central base at Wuhu in Anwei (Anhui) Province. She had been a Baptist. The couple had four children, three daughters and a son. William died 30 September 1936 in Toronto, two years after retiring from China. They are both buried at the Breslau Mennonite Cemetery, Breslau, Ontario.

William Shantz completed primary school and one year of a business college and worked as a clerk in the general store in Breslau. He was converted during revival meetings under the pastor Moses Weber and evangelist Christian Wismer “C. W.” Ruth in 1890, at age 24, not 14, as many accounts say. He was baptized in the summer in the creek that flows through the village. That year the veteran evangelist of the MBiC, Eusebius Hershey, sailed to Liberia and died from malaria after six months. His journey was well publicized in the denominational magazine, the Gospel Banner. William was among several MBiC young people who decided to prepare for foreign mission service as a consequence. He studied at the C&MA Training Institute (then in New York City) 1892-1895, and was accepted for service in the C&MA China mission from 1895. At that time many leaders in the MBiC were urging the church to send its missionaries through the Alliance rather than develop a denominational mission. The Canada Conference accepted William's application for their approval and support, thus making him the MBiC's first officially designated missionary. His Conference ordained him in Breslau on 11 March 1906 on his first furlough from China.

After the year of language study and two years at Wuhu, William Shantz, along with another MBiC member in the C&MA, Calvin F. Snyder from Pennsylvania, volunteered in 1898 to Tao Cheo (Chow), Kansu (Gansu) Province, on the Tibetan (Qinghai) border. Mary Davidson reached Wuhu, after studies at the C&MA school, in 1899. Mary joined William at Wuchang in central China in 1902 after their wedding. They opened a station at Siangtan (Xiangtan), Hunan, about 1909; oversaw ministries and rebuilding at Wuchang (now part of megacity Wuhan) in Hupeh (Hubei) in the 1920s; and oversaw work at Tatong, Anhui, among other responsibilities. When Mary returned early in 1922 to settle their children in Canada, William helped open a new station while training eight inexperienced Chinese evangelists at Taiping Hsien, Anhui.

They each lived through the Boxer Rebellion of 1900 (21 out of 38 C&MA missionaries perishing), the revolution of 1911, warlord chaos of 1927, and numerous robberies, mob attacks (e.g. at Lukiang, Anhui in 1929) and deadly sicknesses. They buried a daughter at Xiangtan. In other words, they simply experienced what thousands of other pioneer missionaries and Chinese Christians experienced in a land much abused by foreigners and local powers.

Matthew Brown Birrel, a co-worker of William Shantz', wrote that Shantz won the confidence of the Chinese. Through a selfless life and characteristic humility, his colleagues compared him in that regard to Moses.