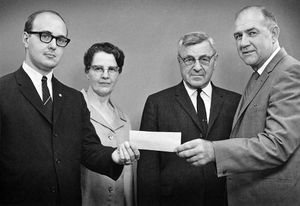 Ward had a year of secondary school after grade eight, which was unusual for rural youth at that time. During World War II Ward declared himself a conscientious objector to war, and did peace service at the Montreal River Alternative Service Work Camp in Northern Ontario. An autograph book featuring Ward’s friends from the Montreal River camp is available in the archives at Conrad Grebel University College. Ward later reflected that he felt the conscientious objectors could have been assigned far more useful work than the road building task the Canadian government assigned them, but his alternative service experience gave Ward a network of relationships among Mennonite men of the various Mennonite denominations which would later prove very helpful.

Upon leaving the alternative service camp Ward continued to farm with his father until 1947 when he began a successful dairy operation north of Waterloo, Ontario. Ward was a master breeder of livestock, and served with various agricultural associations. He was President of Cattle Breeders, President of the Waterloo Farm Co-operative, Manager of the Waterloo Stockyards, and served with the precursor of the Ontario Milk Marketing Board. Ward later operated a beef farm in Wilmot Township west of Waterloo.

Ward was a faithful member of Erb Street Mennonite Church, Waterloo, Ontario, and served the congregation as a trustee.

In 1966, J. Winfield Fretz, then president of Conrad Grebel College, approached Ward about beginning a relief sale in the area to raise funds for the work of Mennonite Central Committee. Ward drew on his wide connections with friends from the alternative service camp, and together they used their organizational and practical skills to run the first Mennonite Relief Sale in Ontario in the town of New Hamburg in 1967. Ward Shantz served as chair of the Relief Sale Committee until his death. By 2017 the Ontario Mennonite Relief Sale drew tens of thousands of people and raised over $300,000 annually for the work of Mennonite Central Committee.

Initially some people felt that buying food, quilts and other items at the Relief Sale in order to accomplish world relief and development was inappropriate and consumerist. However, the great number of volunteers and attendees who participated and donated to the relief sale over the years has demonstrated the overwhelming support the Mennonite congregations and public at large have given to the Ontario Mennonite Relief Sale and its goal.

Ward A. Shantz was fondly remembered as a man who helped diverse groups of Mennonites come together and work together in this vital fundraising work.