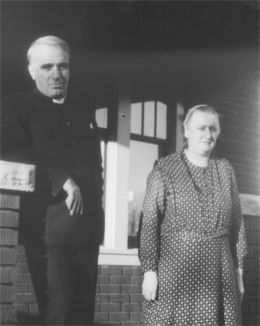 Moses H. Shantz: church leader and farmer; born 10 September 1884 near Haysville, Ontario to Solomon and Mary Ann (Hostetler) Shantz. He was the oldest in a family of two sons and five daughters. On 4 March 1908 he married Catherine Martin (9 March 1885-4 December 1974) of Elmira, Ontario. They had two sons (one died in 1911) and two daughters. Moses died 14 August 1938 of a heart attack at his home across from the Blenheim Mennonite Church near New Dundee, Ontario.

Moses Shantz was a farmer by vocation, working the home farm until 1923. The family then moved to the farm where he died. He was baptized in 1898, and was immediately active in the Sunday school and Bible Conferences of the day. He was among the first class of students in the Ontario Mennonite Bible School in early 1907 and on 13 October 1907 was ordained as a minister for the Blenheim Mennonite Church, his home congregation. On 24 July 1938 he was ordained as a bishop, particularly to serve the congregation at Clarence Center, New York. However he died before he was able to make any visits as bishop to that congregation.

As was common for his day, Shantz did not have much formal education, though he had a life-long interest in reading. His personality was empathetic, an asset in his pastoral relationships. He had a good memory for names, and related easily to persons of many backgrounds. His preaching style was "heart to heart" rather than "sermonizing." A co-worker, S. F. Coffman, described Shantz as "a remarkable helper to others on account of his deeply sympathetic nature. He could enter into their problems with understanding and appreciation; he felt with them their burdens and and their sorrows; then, with the most kindly manner, he led them to wise decisions and to the comfort of Christian attitudes in all of their problems."

His administrative gifts led Moses H. Shantz to numerous leadership roles both in his area conference and within the larger Mennonite Church. He served as moderator of the Mennonite Conference of Ontario from 1922-1932, and again from 1934-1936. From 1932-1934 he was assistant moderator. He became Vice-President of the Mennonite Mission Board of Ontario in 1929 when missions activity within the conference was reorganized, and he served in that role until 1936. In his active promotion of mission work, Shantz traveled often to the mission stations. He also served on the oversight board for the Ontario Mennonite Bible School.

Within the denomination Shantz served on the Canadian Section of the Peace Problems Committee, and a number of times on the Committee on Arrangements for General Conference. In 1933 he was elected as Vice-President of the Mennonite Publication Board, and in 1935 became President of that Board, serving until his death.

Moses H. Shantz suffered health (heart) problems in his later years, and his premature death removed a calm, mediating voice from the Ontario Mennonite scene at a time when fractious doctrinal issues created tension within the conference. His stature in the Mennonite community is indicated by the number of persons who attended his funeral -- over one thousand in all, including visitors from Ohio, Indiana, Pennsylvania and New York.

Calendar of Appointments of the Mennonite Church of Ontario (1927-1938)

Personal Papers at the Mennonite Archives of Ontario