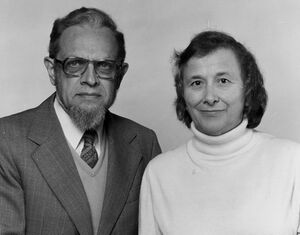 Shank’s educational background included Goshen High School (1942, with letters in debate, orchestra, and chorus), Goshen College (1948, Bachelors in Sociology), Goshen Biblical Seminary (1952, Bachelor of Divinity, with supplementary studies at the Protestant Theological Faculty of Brussels and the Free University of Brussels), Eastern Baptist Seminary (1956, Master of Divinity) and the University of Aberdeen, Scotland (1980, Doctor of Philosophy in Religious Studies). Shank’s three-volume PhD dissertation focused on the life, thought, and ministry of the Liberian prophet William Wade Harris—a comprehensive study which in 1994 was abridged by Jocelyn Murray and published as Prophet Harris, the “Black Elijah” of West Africa (Leiden: E.J. Brill).

Over a period of nearly four decades, Shank and his wife, Wilma, served with Mennonite Board of Missions, first in Belgium (1950-1973) and then West Africa (1979-1989). In Belgium, the Shanks ministered to immigrants, provided emergency relief and care for war orphans, launched the first Mennonite church in the country after a hiatus of nearly three and a half centuries and created the Brussels Mennonite Center. In the early years of their Belgium assignment, Shank joined seven other American Mennonite men living in Europe—former relief workers, missionaries, university students—to assess the European post-war spiritual, ecclesiastical, and religious situation and to reflect on their own Mennonite calling and vocation in that setting. In preparation for the group’s first meeting in January 1952, Shank prepared a paper he entitled, “A Missionary Approach to a Dechristianized Society.” This essay and other papers produced over the next two decades by what became informally-known as the “Concern Group” resulted in an entire Concern pamphlet series focusing upon the condition of the American Mennonite church in relation to its founding principles.

Many North American Mennonite service workers heading for francophone Africa studied French in Brussels, Belgium, before continuing on to their assignments in Algeria or the Congo. In Brussels, they met and were ofttimes hosted by David and Wilma Shank. These encounters, along with a growing number of Africans traveling through or residing in Belgium, planted early seeds for what became a second career for the Shanks. Through contacts with members of the Kimbanguist Church in the Congo, Shank became interested in the rapidly growing African-initiated churches (AICs) across the continent. To pursue that interest, he began doctoral studies in 1976 at the University of Aberdeen under the supervision of three prominent “Africanist” church and mission historians—Drs. Andrew Walls, Harold W. Turner, and Adrian Hastings. The Shanks eventually served for ten years in West Africa (1979-1989), laying the groundwork for Mennonite ministries in Ivory Coast and Benin, building relationships with AICs across the region, hosting pan-African consultations with AIC leaders and other Western mission workers, and teaching in a wide-range of ecumenical and academic institutions.

A collection of Shank’s writings on both his European and African mission experience—including “A Missionary Approach to a Dechristianized Society,” “Discovering the Strategy of the Spirit,” “What Western Christians Can Learn from African-Initiated Churches,” “A Religious Itinerary from African Traditional Religion to New Testament Faith,” and “Qualities That Enable Mennonites to Relate to African-Initiated Churches”—were compiled, edited, and published in 2010 by James R. Krabill under the title, Mission from the Margins. A complete bibliography of Shank’s writings is included there on pages 341-351.

Krabill, James R., editor. Mission from the Margins: Selected Writings from the Life and Ministry of David A. Shank. Elkhart, IN: Institute of Mennonite Studies, 2010.