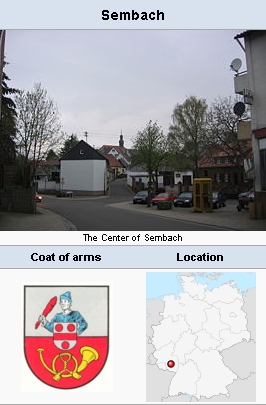 Sembach, a village in the Palatinate, Germany (coordinates: 49° 30′ 49″ N, 7° 51′ 38″ E), not far from Kaiserslautern, since the end of the 17th century the seat of a Mennonite congregation, with a membership in 1957 of some 250 baptized members; most of the families live in the villages and on the farms around Sembach: Wartenberg-Rohrbach, Mehlingen-Neukirchen, Enkenbach, Neuhemsbach, Langmeil, Potzbach, Schmitterhof, Otterberg, Münchhof, Randeckerhof, and Pfrimmerhof. The original families of the congregation — Krehbiel, Eymann, Eichelberger, Würtz, Schnebele, Beutler, Latschar, Kinzinger, Höfli — immigrated from the Emmental, Switzerland, in 1660-1710. 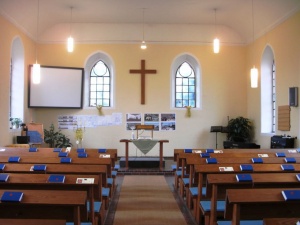