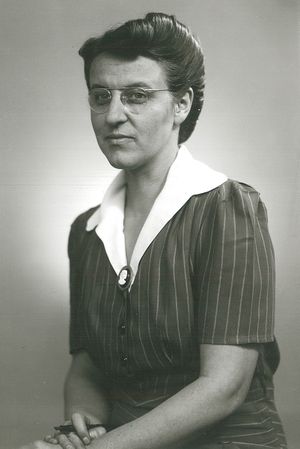 Alta Elizabeth Schrock, humanitarian and environmentalist, is popularly known as the founder of Penn Alps Restaurant and Spruce Forest Artisan Village in Grantsville, Maryland. Schrock is also remembered as the first (Old) Mennonite woman to earn a PhD and retain her membership in the Mennonite Church.

Born on 3 April 1911 to Alvin C. and Amelia (Miller) Schrock near Grantsville, Alta attended school at the Amish Mennonite Children's Home, an orphanage built on her grandfather’s farm, and Salisbury High School, across the Mason-Dixon Line in Salisbury, Somerset County, Pennsylvania. During the 1930s, she wrote a column on nature, folklore, and local history for a weekly newspaper, the Meyersdale Republican. She attended Waynesburg College (AB 1937); University of Cincinnati, Oberlin College, and Kent State University (MS 1939) before earning a PhD in biology at the University of Pittsburgh in 1944. As a scholarship student at Waynesburg, she painted wildflowers onto hundreds of glass lantern slides for use in botany courses. Her doctoral dissertation focused on analysis of pollen recovered from test borings in Glade Bog, a wetland on Mount Davis several miles north of Grantsville. When the state announced plans to dam Glade Run to create Highpoint Lake, Schrock unsuccessfully petitioned to preserve the habitat for rare plants, and moved some specimens to a similar bog in West Virginia and contributed others to the Carnegie Institute in Pittsburgh.

In 1940-41 she taught biology and served as dean of women at Bluffton College. That spring she went home and shipped a truckload of trees and plants from Mount Davis to Bluffton College, where she supervised planting of a campus arboretum. In the early 1940s, she helped to establish Civilian Public Service Camps at Bluffton, Indiana (#13); Denison, Iowa (#18), and Sideling Hill, Pennsylvania (#20). She served as matron and practical nurse, but also published nature columns in camp newsletters and led the men on nature walks.

She taught anatomy, physiology and bacteriology to nursing students at American University (1944-46), then joined the faculty at Goshen College (1946-58). At Goshen she taught biology, anatomy and physiology, nature study, horticulture, and conservation, and developed “Biology for Rural Service,” which combined studies in soil conservation, community development, and church planting. During this time, she directed a chapter of the Audubon Society on campus and opened her home, Fliederhof, a relocated hay barn furnished with antiques, for weekly student gatherings. Additionally, she raised funds to establish the Mennonite Youth Village in White Pigeon, Michigan, and contributed articles to Gospel Herald and Mennonite Community.

While on leave from Goshen in 1951-1954, she worked with refugees under Mennonite Central Committee in Berlin, then spent eight months traveling alone in Europe, researching traditional handicrafts and the origins of Amish families including the Millers. She taught for three more years at Goshen, but by the late 1950s, she longed to return to Appalachia in hopes of serving the people of the Casselman Valley and nearby mountains of Pennsylvania, Maryland, and West Virginia. From 1960-1977 she taught biology at Frostburg State University in Frostburg, Maryland, while advising its chapter of Intervarsity Fellowship.

A lifelong member of Springs Mennonite Church in Somerset County, Pennsylvania, she established the Springs Historical Society in 1957; and in 1958, instituted the annual Springs Folk Festival, the first of many projects to foster economic, social, and spiritual development in the region. She opened Penn Alps Restaurant and Crafts Shop in 1958 to market the work of local people, and in 1967 expanded the complex by relocating settlers’ log cabins and repurposing them as studios for pottery, weaving, woodcarving, and metal work, creating Spruce Forest Artisan Village. She was founding editor of The Casselman Chronicle (1961) and co-editor of Journal of the Alleghenies (1963), and in 1960 she published a history of the Joel B. Miller family. She started the first kindergarten in Garrett County, Maryland, and worked with VISA volunteers in community development efforts. Her devotion to the welfare and heritage of the region were recognized by her induction into the Maryland Women’s Hall of Fame in 1991, and in 2007 the Maryland State Arts Council created an award called the Achievement in Living Traditions and Arts (ALTA) Award, named in her honor. She died on 7 November 2001 in Cumberland, Maryland.