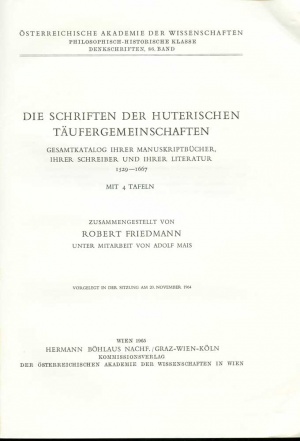 Die Schriften der Huterischen Täufergemeinschaften, Gesamtkatalog ihrer Manuskriptbücher, ihrer Schreiber und ihrer Literature, 1529-1667 (The writings of the Hutterite Anabaptist communities: Union catalogue of manuscript books, their writers and their literature, 1529-1667) is a highly annotated analytic bibliography of all Hutterite manuscripts known up to the time of publication in libraries, archives, private collections and still held by the Hutterites themselves. The only manuscripts omitted from this bibliography are those on hymnology. As the title indicates the bibliography is limited to first 139 years of Hutterite history. The compiler, Robert Friedmann (1891-1970), was the leading Hutterite historian of his generation and dedicated a significant portion of his life to the discovery of Hutterite codices.

Hutterites in their tight-knit well-ordered colonies in Moravia and Hungary had the inclination, resources and time to become prolific writers. They produced a very large number of handwritten codices. Many of these codices were confiscated in the numerous persecution campaigns of government and church. Others of course were carried by the Hutterites as they were forced to frequently relocate and over time some of these were scattered.  Friedmann’s conversion to Christianity and Anabaptist studies "began in 1923 when he prepared a seminar paper on the contents of three Hutterian codices, which 'gripped [him] profoundly.'" He embarked on a lifetime pursuit of finding more of these Hutterite codices. A 1954 Guggenheim fellowship enabled him to travel widely in his searching.

This publication begins with "Ein persönlicher Bericht als Vorwort" (A personal account as a preface) in which Friedmann describes his encounter with and search for Hutterite manuscripts. The bibliography itself is divided into two sections. The first part, "Quellenkunde" (Report on sources), gives information on 220 codices found in 21 public institutions, libraries, archives and universities, and on three more private locations. Friedmann organized the information alphabetically by library location and added information on how the institution acquired its codices. This section also contains information on codices now known to be lost, on codices described by the Jesuit persecutor Christoph A. Fischer in 1607, on the confiscations of 1757-1784 and on manuscript and published editions of Peter Riedemann’s Rechenschaft. This section (pages 35-45) includes an interesting account by Dr. Adolf Mais of Austria on the discovery of 126 items found in 1961 hidden in the ceiling of an old Anabaptist house in Slovakia.

The second part is titled "Katalog aller Prosaschriften der Huterischen Brüder" (Catalogue of all prose writings of the Hutterite Brethren). This part contains brief biographies of 82 Hutterite writers with the titles of their writings and those of an additional 21 non-Hutterite, mostly Anabaptist, writers whose works were also found in the codices. The next part contains a highly varied array of anonymous tracts, dogmatic, exegetical, devotional and worship works such as several hundred sermon pamphlets. Then there is a liturgical calendar giving sermon texts for the year, a chronology table for homological and exegetical writings for the period 1566-1677, comments on codices containing concordances, church regulations and disciplines, and on medical codices.

However, in spite of the prodigious efforts by Friedmann and his colleagues the bibliography lacks some of the basic scholarly apparatus like name, place and subject indexes. Further, the bibliography focuses more on the locations and discovery of codices than on detailed descriptions and content analysis of the codices.

This was a pioneering bibliography opening up to all scholars the rich field of early Hutterite faith and teachings as revealed in their manuscripts. It represents a lifetime of travel and expert investigation by Robert Friedmann to identify and describe many manuscript works that were anonymous, had pseudonymous author names, or were previously incorrectly ascribed. He also clarified manuscripts with fictitious place names, and fragmented works with important pages missing. This bibliography, Die Schriften der Huterischen Täufergemeinschaften, has provided many scholars the impetus for further discovery and analysis of Hutterite manuscripts.

Find this item in a library on Worldcat