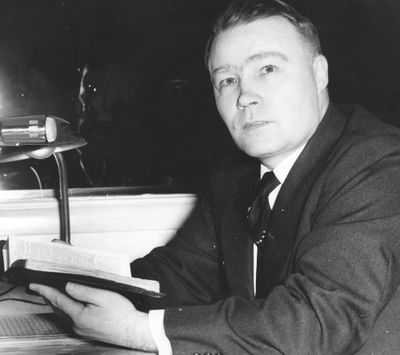 John Schmidt’s parents and siblings immigrated to Canada in 1926 and began life in Canada, working in the sugar beet fields in Alberta, eventually opening and operating a blacksmith and welding shop in Coaldale.

John attended Coaldale Bible School (1936-1937) and then Prairie Bible Institute in Three Hills, Alberta (1937-1939). He also went to Calgary Technical School where he learned electric and acetylene welding to use in his father’s welding business.

During World War II, in June 1941, John Schmidt registered as a conscientious objector (CO). He was stationed in Jasper, Alberta, at Camp Geikie (Alberta) and 21 Mile Camp near Radium Hot Springs, British Columbia (B.C.). When the camp closed, John was assigned a night shift at the South Burrard Shipyards in Vancouver, which took a harsh toll on his health, so much so that under doctor’s orders, John requested a transfer, resulting in him working at a dairy farm in Kamloops, B.C. In 1943, John Schmidt applied to the Military Medical Corp, was accepted, and served as a non-combatant CO. He was released from military service in 1944 and sent home to Aldergrove, B.C., to work on the family farm after his father experienced a serious health crisis.

While attending North Abbotsford Mennonite Brethren (MB) Church, John met Mary Nikkel and they were married on 15 July 1945. For two years they filled the roles of schoolteacher, preacher, and medical personnel for the First Nation reserve at Little Grand Rapids, Manitoba, as missionaries for the United Church of Canada. When they returned home to Aldergrove in the fall of 1948, John got a job working at Buckerfields going from field to field maintaining their machinery. During this time, they attended and participated in the founding of the East Aldergrove MB Church.

In 1949, Mary and John left Aldergrove to attend Mennonite Brethren Bible College (MBBC) in Winnipeg. In the spring of 1950, John became director and speaker of the Gospel Light Hour, a radio ministry program begun by several college students with the moral support of the college faculty.

After finishing studies at MBBC in 1952, John continued working with the Gospel Light Hour radio ministry which officially became a ministry of the Manitoba MB Conference in 1954. John brought stability to the program as he remained its director until 1963. During this time, John also became the full-time city missionary with Winnipeg’s City Mission. The Manitoba MB Conference had purchased the Gospel Light Mission Church on Logan Avenue in Winnipeg and through John’s encouraging work, the church flourished. In 1959, this church moved to a vacated church building in the Fort Rouge area of Winnipeg and was named the Fort Rouge MB Church. Eventually, it moved again and became the Fort Garry MB Church, but just before that, on 10 July 1963, John left the Radio ministry and the City Mission and accepted a pastoral position in the Vineland MB Church in Ontario.

For the next 20 years, John and Mary ministered in several MB churches: 1963-1968 at Vineland, and during the last two years, 1967-1968, also at St. Ann’s Community Church; 1968-1973 at Winkler, 1976-1980 at Tofield, and 1980-1983 at Waldheim, with a two-year period, 1973-1975, working on the concept of a Noah’s Ark exhibition centre near Niagara Falls, Ontario, to display the grandeur of God’s work through nature and science, a project that was never realized. In his retirement years, after age 65, he continued in ministry well into his 70s, serving as interim pastor in several Winnipeg churches.

John M. Schmidt was known for boldly sharing his faith and remaining full of hope in the love of God.