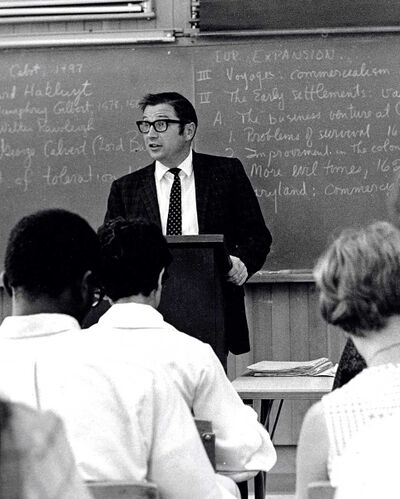 Theron Frederick Schlabach: American Mennonite scholar, editor, and author, was born 6 December 1933 in Elkhart County, Indiana, USA, to Ezra Schlabach (11 June 1903-6 May 1987) and Vivian Margaret Johns Schlabach (3 January 1903-15 September 1996). He was the fourth child and third son in a family of four sons and three daughters. Theron grew up on the family farm. He attended public schools through grade 11 and completed his final year of high school in 1951 at Eastern Mennonite School in Harrisonburg, Virginia. He was baptized as a teenager in the Benton Mennonite Church. He married Sara Ann Kauffman (18 May 1936-11 September 2009) on 8 January 1955. They had three sons and one daughter. Theron Schlabach died 13 May 2021 in Goshen, Indiana. Theron and Sara Schlabach are buried in the Clinton Union Cemetery, Clinton Township, Elkhart County, Indiana.

Initially, Theron Schlabach worked as a big rig truck driver. Even after pursuing an academic career, Schlabach took pleasure in driving these trucks during summer breaks. He attended Goshen College, where he graduated with a BA in History in 1960. Next, he went to the University of Wisconsin, where he earned an MA (1961) and PhD (1966) in social history. His dissertation was on Edwin E. Witte, the 20th-century social reformer from Wisconsin.

Theron Schlabach returned to Goshen College to teach history in 1965. He retired in 1995 but continued to lecture part-time and to pursue his scholarly research efforts. In his years at Goshen College, in addition to teaching courses in American history, Schlabach was best known for a course titled "Social History of Mennonites in America" and for his deep commitment to the craft of clear academic writing. He was a rigorous editor whose labors—often behind the scenes—enhanced the prose of numerous students and fellow authors.

Schlabach published several groundbreaking essays in The Mennonite Quarterly Review. In "Reveille for 'Die Stille im Lande': A Stir Among Mennonites in the Late Nineteenth Century" (July 1977), he challenged the standard description of organizational energy of late-19th century progressives—which resulted in the establishment of numerous Mennonite-related institutions—as an "awakening." Schlabach advocated instead for the more neutral term of "quickening," recognizing that the adoption of these new institutional forms also paralleled the growing acculturation of the Mennonite Church into mainstream American religious and social culture.

That wariness toward a simple equation of institutional activity with Christian faithfulness also found expression in his sympathetic treatment of the Old Order Mennonite and Amish groups in the 19th and early 20th centuries and in his history of the (Old) Mennonite mission movement titled Gospel vs. Gospel: Mission and the Mennonite Church, 1863-1944 (1980). In that volume, Schlabach documented the remarkable outpouring of energy among North American Mennonites into various missionary enterprises in the first half of the 20th century; but he also raised critical questions about the tendency of many Mennonite missionaries to adopt the forensic language of salvation and the atonement from Pietism, American revivalism, and the Fundamentalist movement in ways that distorted what he called a "full-orbed" Anabaptist understanding of the Gospel rooted in a vision of Shalom.

Schlabach was an active member of the Mennonite Historical Society (MHS), serving several terms as the organization's president and as the editor of the MHS-sponsored "Studies in Anabaptist and Mennonite History" book series. In his role as the general editor of the "Mennonite Experience in America" series, he oversaw the publication of four significant volumes that situated the Mennonite story in America within a rich social, political, and economic context. Schlabach authored the second volume in that series, Peace, Faith, Nation: Mennonites and Amish in Nineteenth-Century America (1988).

He spent many post-retirement years working on his magnum opus, a magisterial biography of Guy F. Hershberger, the well-known Mennonite sociologist and church leader whose reflections on war, violence, and peace helped Mennonites navigate perilous times in the first half of the 20th century. Schlabach's War, Peace, and Social Conscience: Guy F. Hershberger and Mennonite Ethics (2009) will long remain the definitive study of Hershberger and the (Old) Mennonite peace position in the middle decades of the 20th century.

Throughout his career, Schlabach understood his vocation as "scholarship for the church." He helped to establish the Madison Mennonite Church while studying at the University of Wisconsin. He was an active member of College Mennonite Church for more than five decades, participating vigorously in the congregation's life and serving as the author of a centennial history of the church in 2003.