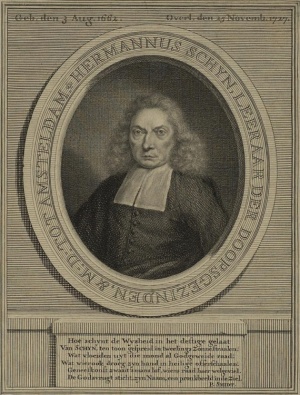 Herman (Hermannus, Hermanus, Harmannus) Schijn (Schyn), born 3 August 1662, at Amsterdam, died there 25 November 1727, studied medicine at the universities of Leiden and Utrecht, obtaining his M.D. degree at Utrecht in 1682, practiced medicine at Rotterdam until 1690 and then until his death at Amsterdam. At the same time he devoted himself to the interests of the Mennonite church. In 1685 he was appointed deacon of the Rotterdam Flemish congregation and in 1686 called to the ministry in the same congregation, serving as preacher until 1688, when he became an elder. In 1690 he moved to Amsterdam and served as an elder of the Zonist church from 1690 until his death. Herman Schijn had two sons.

Schijn was the great leader of the conservative Mennonites (Zonists) in the Netherlands. Besides this the Dutch brotherhood is deeply indebted to him for his historiography, Schijn being one of the first Dutch scholarly historians. As a member of the Dutch Mennonite Committee of Foreign Needs (Commissie voor Buitenlandsche Nooden) he was active in behalf of the oppressed Mennonites in Switzerland and Prussia. In 1707-8 he carried on a correspondence with the Mennonites in Germantown, Pennsylvania. As a conservative leader Schijn was much disturbed when his former church of Rotterdam in 1700, then merging with the Waterlander congregation, resolved to admit to the communion services "all Christians," not only those who were members of other Mennonite churches or other Christian denominations, but even unbaptized persons who considered themselves Christians. Against this liberal formula of benodiging (i.e., invitation) with its Collegiant spirit Schijn published Aenmerkingen op het formulier van benodiging (Amsterdam, 1703).

Of special interest is a book by Schijn (published at Amsterdam in 1723, reprinted there 1738) entitled Ontwerp tot vereeniging der doopsgezinde Christenen (Project for the Unification of the Mennonite Christians). In this mild and wise book the author deals with the desirability and possibility of a unification of the different branches of Dutch Mennonites, and particularly of a merger between the Lamists and the Zonists. Previous attempts made to unite these two largest groups of Mennonites had failed. The Lamists accused the Zonists of putting too much importance on the confessions of faith, while the Zonists complained that the Lamists were guilty of a "considerable indifference" (aenmerkelyke lossigheid) concerning the basic principles, and objected to the Collegiant and even the Socinian views prevalent among the Lamists. Schijn's deacon, Lambert Bidloo, severely attacked the Lamists because of their "unlimited tolerance" (onbepaelde verdraegsaemheyt). The book by Schijn on this matter is very moderate. His position is as follows: all possible efforts should be made to bring about a unification; for many of the differences between the Lamists and the Zonists are insignificant, such as footwashing, the question of silent or "spoken" prayer, of strict or mild banning and shunning, and a number of minor questions. But on two points Schijn maintains Zonist doctrines: the practice, ignored by the Lamists, that no unbaptized person should be admitted to the Lord's Supper and that the congregation should have a confession. Schijn believed that choosing one of the outstanding confessions would cause no difficulty. Since J. Ph. Schabaelje in his Vereenigingh van de principale artijckelen des Geloofs (1640) had shown that on the major points the differences between the confessions of faith were slight, it was not important which of the confessions was to be used in the brotherhood; Schijn himself preferred the confession by Hans de Ries. Schijn's book closes with a cordial encouragement to unity: "So we entreat the Doopsgezinden by the mercies of God and the precious blood of His only begotten Son, that they . . . now make an end of their divisions and follow peace, without which no man shall see the Lord." Schijn's admonition, however, was fruitless. Not until 1801 was the Zonist-Lamist schism healed by the union of the congregations at Amsterdam.

Herman Schijn is especially known for his historical works. In 1711 he published at Amsterdam his Korte historic der protestante Christenen, die men Mennoniten of Doopsgezinden noemt. In order to bring their principles before the learned world, which then often had misconceptions concerning their origin and doctrines, Schijn resolved to publish his book in a Latin translation, and thus a somewhat enlarged Latin edition appeared, Historia Christianorum qui in Belgio Foedere inter Protestantes Mennonitae appellantur . . . (Amsterdam, 1723). A Dutch translation of this Latin work was made by M. van Maurik, Geschiedenis der Protestante Christenen in't Vereenigd Nederland genaamt Mennoniten . . . (Amsterdam, Utrecht, 1727). A greatly enlarged edition of Schijn's book, revised by himself, but published after his death, was Historiae Mennonitarum Plenior deductio (Amsterdam, 1729), of which a Dutch translation by van Maurik appeared at Amsterdam in 1738: Uitvoeriger Verhandeling of vervolg van de Geschiedenis der Mennoniten . . . . A new translation of the Historiae of 1729 was made by Gerardus Maatschoen. Maatschoen was a colleague of Schijn in the Amsterdam Zonist church. He not only translated Schijn's book, but also thoroughly revised and greatly enlarged it. He added a long preface and a new volume composed by himself. The title of this Maatschoen edition reads as follows: Geschiedenis dier Christenen, welke in de Vereenigde Nederlanden onder de Protestanten Mennoniten genaamd warden . . . (three volumes, Amsterdam 1743-45).

The first volume of this new edition by Maatschoen contains eleven chapters: (1) Origin of the name Wederdopers (Anabaptists) and in how far the Mennonites differ from them; (2) On the baptism of Jewish proselytes; (3) Views of the Mennonites concerning baptism; (4) Proofs adduced by the Roman Catholics, Lutherans, and Reformed as to infant baptism; (5) History of the followers of Menno Simons; (6) History of the Anabaptist doctrines in the 16th century in Germany and elsewhere; (7) Confession of faith by Hans de Ries and Lubbert Gerritsz (here found in pleno); (8) Clear testimonies of Menno Simons, showing the difference between the Mennonites and the Anabaptists; (9) The aforementioned differences explained from the Confessions; (10) The differences shown as to the practices of life, and according testimonies of some great princes; (11) An explanation why the Mennonites always have been averse to fanaticism (Geestdryverye). Volume II contains four chapters on the origin of the Mennonites (here Schijn points out the similarity of Mennonite principles and those of the Waldenses), the name of the Mennonites (preferring to call them Mennonites and not Doopsgezinden, as the Lamists did), their doctrines and their confessions. After these four chapters this volume contains 24 biographies and bibliographies on Dutch Mennonite leaders, including Menno Simons, Dirk Philips, Hans de Ries, Reinier Wybrandsz Wybema, Pieter Jansz Twisck, Tieleman van Braght, Galenus Abrahamsz de Haan, and Jan Philipsz Schabaelje. Volume III, not written by Schijn but by the editor Gerardus Maatschoen, is entitled Aanhangzel, Dienende tot een Vervolg of Derde Deel van de Geschiedenisse der Mennoniten. It contains some 19 more biographies of Dutch Mennonite leaders.

This edition of 1743-45 has some fine pictures of baptism, communion service, footwashing, and other ceremonies of the Dutch Mennonites as practiced during this time, and a large number of engraved portraits of the leaders whose lives and books are described. Schijn's portrait is found in Volume I, facing page 1.

Schijn's historical works are not historiography in the modern sense of the word, describing a number of historical facts or events in chronological and logical order, but can be characterized as a kind of apology and dogmatics, elucidated and illustrated by facts from Mennonite history. Schijn's main thesis is that the Mennonites did not take their origin and doctrines from the revolutionary Münsterites as generally was stated by Reformed authors and other opponents, but that from the very beginning down to the Middle Ages, they had been a peaceful group of Biblical Christians, in the 16th century gathered and led by Menno Simons. This apologetical intention is the main trend of Schijn's work. At the present time the books of Schijn are valuable especially for a large number of particulars about Mennonite leaders and about books, many of which are now lost, since Schijn related their contents.

Herman Schijn was a highly esteemed leader not only among his own group, but also among his opponents. He was a very beloved preacher in his Amsterdam Zonist church. After his death Maatschoen delivered a commemorative sermon in the Zonist church at Amsterdam on 28 December 1727: Eeuwigdurende Gedagtenis des Rechtvaardigen . . . Lykrede op H. Schyn (Amsterdam, 1728). In 1727 Maatschoen and others published Ter Lijkgedagtenisse van H. Schyn, leeraar der Doopsgezinden in de Zon en Med. Doctor te Amsterdam.