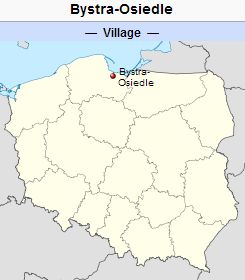 Scharfenberg was first mentioned in historical documents in 1308 and was granted a charter by the Teutonic Knights in 1367. In 1546, it was destroyed by a flood and was colonized by Dutch farmers in 1547, along with Landau and the Sperlingsdorfer Bruch. At least the second generation of settlers were Mennonites, the family names of Jantzen, Philippsen, Peters, and Giesbrecht, soon also those of Andres and Froese being predominant. If it may be assumed, as is probable, that the first generation of settlers were Mennonites from the Netherlands, this area was the first settlement of Mennonites in Prussia.

Until 1793 the village was part of Danzig in Royal Prussia (also known as Polish Prussia) in the Kingdom of Poland. The Second Partition of Poland in 1793 added Danzig and its surrounding territory to the province of West Prussia. The village was situated in the district (Kreis) of Danzig from 1818 until 1887, when it became part of the district of Danziger Niederung. The village became part of the Free City of Danzig from 1920 until the outbreak of World War II in 1939, when it came under the control of Nazi Germany. In February 1945 it was occupied by Soviet forces and eventually returned to Poland. In 2012 it was a village in the administrative district of Gmina Pruszcz Gdański, within Gdańsk County, Pomeranian Voivodeship.