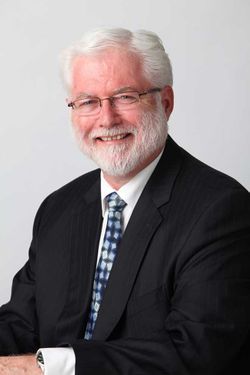 Ronald “Ron” George Sawatsky: consultant, denominational leader and retirement community administrator, was born in Altona, Manitoba, Canada on 19 March 1950 to Bernhard “Ben” Sawatsky (26 January 1913-21 January 1998) and Susanna “Susie” Falk Sawatsky (25 April 1924-27 May 2014). He was the youngest of three children, and the second son. On 12 August 1972 Ron married Susanna “Sue” Thiessen (1950- ), daughter of Frank Thiessen (1928- ) and Aganetha Bergen Thiessen (1928- ). Ron and Sue Sawatsky had one son (Bevan) and one daughter (Laresa). Ron Sawatsky died 28 June 2014 in Warrington, Pennsylvania. His ashes are interred at the Cedar Grove Mennonite Cemetery in Markham, Ontario.

When Sawatsky was very young, his family moved to Winnipeg, Manitoba, where he grew up. His father was an Evangelical Mennonite Mission Conference minister, who also worked as a building contractor. Ron attended elementary school and high school in Winnipeg, though he graduated from Steinbach Bible Institute. He grew up in the Gospel Mennonite Church in Winnipeg. The Sawatsky family was a musical one that often performed together in local churches.

When his parents attended Eastern Mennonite College for two years in the late 1960s, Ron attended there for one year as well. He also obtained training in studio photography, and small equipment repair (cameras).

From 1975-1977 Ron and Sue Sawatsky served a Voluntary Service term with Mennonite Central Committee in Akron, Pennsylvania. Immediately after this they moved to Ontario where Sawatsky completed a BA (1979) and MA (1980) in Religious Studies at the University of Waterloo. He earned a PhD in Religious Studies at the University of Toronto in 1986. Ron found employment in various areas of interest during the next years, including retirement communities and their development. In 1993 the family moved to Waterloo, Ontario when Ron became Vice President, Administration and Finance for Conrad Grebel College. This was a time of severe financial constraints in Ontario higher education, and this position ended in 1995.

Ron then worked in management consulting, leading in 1998-99 to a consulting contract and then role as chief executive officer for Rockhill Mennonite Community (a continuing care retirement community in Sellersville, Pennsylvania), a position he held until December 2012. During these years he was actively engaged in expanding Rockhill’s program and operations, as well as participating in a variety of professional organizations related to long term care both within and beyond the Mennonite community. Ron’s Mennonite organizational leadership began in 1985. He chaired the steering committee for a three-day Canadian Mennonite Bicentennial event planned for the Harbourfront Centre in downtown Toronto. The event, which utilized up to 600 volunteers, featured music, food, art, crafts and literature, and brought Ron’s organizational skills to the attention of denominational leaders.

One of the challenges during Sawatsky’s time of leadership was the creation of the Mennonite Publishing Network (later MennoMedia) through the merger of Mennonite Publishing House (MPH) and Faith and Life Press. The merger revealed a serious financial crisis at MPH that required the downsizing of the new denomination’s publication program, and included the laying off of many staff. Ron was part of the leadership group that oversaw this transition as well as the fundraising required to address the liabilities. In 2002 he chaired the transition MPH board.

Sawatsky’s organizational gifts also extended to music. He was the founding president of the Pax Christi Chorale in Toronto, formed in 1987, and served on the executive of Menno Singers in the Kitchener-Waterloo area.

In 2009 Ron Sawatsky was diagnosed with Lyme disease, though he had begun to experience mobility concerns a few years previously. He engaged aggressive treatment programs with determination, but his health continued to decline and he died unexpectedly from cardiac arrest.

Helmut Harder, General Secretary of the Conference of Mennonites in Canada during the formation of Mennonite Church Canada, said Ron Sawatsky was a “born leader and a committed churchman. He was a keen observer of group dynamic, and he listened well. It was a joy to collaborate with him.”